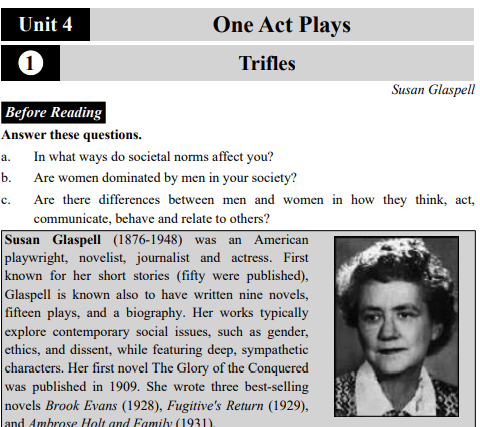 This play describes different points of view regarding Mr. Wright’s Death in his own house. Some officers are investigating the case after a neighbour visited the house and reported about the death. The wife was arrested because she was at home during the event. But she says he must have hanged himself while she was asleep. Two neighbouring women help to search the house and find some objects. The men think these are trifles. The men find no sure evidence. The women find a dead bird which Mrs. Wright kept but hide it from the men.

The play is about the unequal status and relation of men and women. Males have always dominate females. If it is too much for her to tolerate, then there could be a terrible reaction. We feel the writer’s sympathy for such women.

a. Do you believe that Mrs. Wright killed her husband? Explain.

Ans: From Mr. Hale’s reporting, the officers suspect Mrs. Wright for killing her husband. But they do not find evidence. From the talk and findings of Mrs. Hale and Mrs. Peters, we get the idea that Mrs. Wright must have done it.

Mrs. Wright’s activities and statement seem enough to take her as the prime suspect. She did not report the police about the death. And she said he must have hanged himself while she was asleep.

The unhappy life of Mrs. Wright gives us a clue about the murder. She loved singing, but Mr Wright stopped that. The neighbouring women find her bird dead. Mrs. Hale is sure Mr. Wright killed it. She hides it from the officers. This means the wife must have killed him to take revenge.

b. Do you think Mr. Wright’s death would have been uncovered if Mr. Hale hadn’t stopped by the Wrights’ home?

Ans: Mr. Hale stopped by Mr Wright’s home to discuss a matter with him. Then he found out about the death and called the police. Even if he hadn’t gone there, the death would be discovered sooner or later. It cannot remain hidden.
c. Why does Mrs. Hale think that Mrs. Wright’s worries about her preserves indicate
her innocence?

Ans: Mrs. Peters has little knowledge of Mrs. Wright’s situation. As the play moves on, she finds herself connected with Mrs.Wright. She feels that both of them are victims of male dominated society. She feels feminist sentiments for Mrs. Wright. She remembers her past life when she she was powerless due of masculine violence. In the past, her kitten was killed by a boy. She relates it with Mrs. Wright’s dead canary. In the same way, she also relates the pain she experienced after the death of her child with the pain Mrs. Wright felt without her canary.
e. How do the women’s perspectives on men differ?

Ans:  Mrs. Hale seems to be hard against the men. But Mrs. Peters is a bit soft in her attitude. She had heard Mr. Wright was good. And she thinks the officers are just doing their duty. But Mrs. Hale says Wright snatched his wife’s happiness. And she does not like the men trying to charge Mrs. Wright without proof.

c. What is the main theme of the play?

Ans:  The play is about the unequal status and relation of men and women. Males have always dominate females. If it is too much for her to tolerate, then there could be a terrible reaction. We feel the writer’s sympathy for such women.

d. Discuss the symbolism used in the play.

Ans:  The play uses many symbols like birdcage, a bird, the rocking chair and rope to capture the theme of male domination and women’s position in human society. ‘Dead Canary’ is the most important symbol in Trifles. The death of the bird symbolizes the end of peace and harmony in the house of Mr. Wright.  The canary symbolizes the life of  Minnie before her marriage. John used to abuse the canary like his wife. He killed the canary in a fit of rage. At last, due to excessive torture to her she kills her own husband.

The birdcage symbolizes the trapped life of  Mrs. Wright. She was trapped by her marital status. She wanted freedom in her life. But She could not escape from it just like the caged canary. The door of canary bird cage was broken. It symbolizes her broken relationship with her husband. It proves the unequal status and relation of men and women in society. Mal enjoys freedom but women are caged inside their house. Most of the people’s house fails to turn into a home.

e. Discuss the setting of the play. Does it have an impact on the theme of the play?

Ans:   The setting of the play is John Wright‘s farmhouse. The whole play moves around the house. The characters like Hale, the Sheriff, and the County Attorney come to the house  to investigate the murder case of Mr. Wright.  Mr. Wright’s neighbours like Mrs. Peters and Mrs. Hale also visit Mrs. Wright’s house to share her pain.

lf Reference beyond the text

a. The credibility of a character is determined not only by the character’s thoughts and actions but also by what other characters say and think about him or her. Discuss in relation to the characters of Trifles.

Ans: The credibility of a character is determined not only by the character’s thoughts and actions but also by what other characters say and think about him or her. We know many things about Mrs. Wright through the conversation between Mrs. Hale and Mrs. Peters. Readers are informed about Mrs Wright’s marital condition, unknown facts, suffering through the discussion between them. Their  thoughts and actions help to bring sympathy for Mrs. Wright although she killed her husband. Characters play a pivotal role to present the murderer-Mrs. Wright positively.

Ans: Dramatic irony occurs when the reader or audience has information that is unknown to the characters in a play; it creates tension and suspense. Dramatists use different dramatic techniques to make their drama more effective. One technique is dramatic irony.  Dramatic irony helps to  remove the audience’s misconceptions, judgement and perceptions towards characters. It adds more light to the central plot.  We find effective use of dramatic irony in the play to clear our misperception towards the central character, Mrs. Wright.

In the play, two neighbours Mrs. Hale and Mrs. Peters see a dead bird. It is very crucial information to guess the growing tension between Mrs. Wright and Mr. Wright. But the sheriff and county attorney are unaware about it. It creates dramatic irony in the play. The women know that Mrs. Wright used to love the bird too much. We guess that the bird was killed by Mr. Wright. We are convinced about  Mrs. Wright’s decision of killing  her own husband. The audience assume the growing tension and violence between Mrs. Wright and Mr. Wright. So, the dramatic irony not only helps to clear the audience’s doubt about the motive behind the murder of Mr. Wright but also gains sympathy for Mrs. Wright. The dramatic irony also reveals the theme of male domination, unequal status and  unequal relation in society.