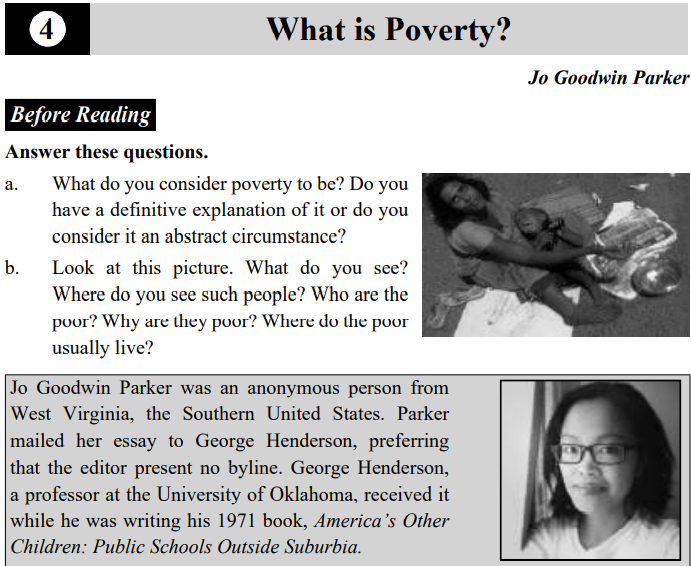 a. What is poverty according to Parker?

Ans: Parker defines poverty mainly as living in lack of even basic requirements. There is not enough diet nor medical care and sanitation for a healthy life. Poverty is shameful as it destroys honor while begging for help. And the future is hopeless.

There is never enough money, so Parker lives in smell and dirt. There are insects, unchanged old mattress and rotting garbage. There is no indoor toilet, nor hot water. Prices rise before she has saved enough to buy cream for her cracked hands and diapers for babies. She cannot send her children to good schools.

b. How is poverty difficult for Parker’s children? List some specific examples.

Ans: Parker’s three youngsters are seriously hindered because of their family’s monetary circumstance. They live in hopelessness because of an absence of sufficient food, instruction, dress, and clinical consideration.When she left the kids under the consideration of their grandma. She discovered her youngsters under the pitiable condition when she got back. Her most youthful child was covered with fly spots and his diaper had not been changed since morning. Her other kid was playing with broken glasses and the most seasoned one was playing alone at the edge of a lake. She needed more pay to concede them at a nursery school. She made 20 dollars per week and a nursery school cost 20 dollars per week for three kids. In this way she left her place of employment.

c. How does Parker try to obtain help, and what problems does she encounter?

Ans: Parker tries to ask for a loan for her children, but it takes time. She has to visit an office and meet one person after another telling her problem. They do not happen to be the right ones. Then she is told to wait. At last, she is sad and full of shame.
d. Why are people’s opinions and prejudices her greatest obstacles?

Ans: People’s opinions make her feel guilty. They say there are schools, but she has no money for extra books, pencils, etc. They say there are health clinics, which are actually too far in the towns. There is her neighbour’s prejudice. He calls her an immoral woman with illegitimate children. This destroys her honour.
e. How does Parker defend her inability to get help? How does she discount the usual solutions society has for poverty (e.g., welfare, education, and health clinics)?

Ans: Parker is unable to get help. The usual solutions like welfare, education and health clinics do not work in her case. Unemployed people get insurance. But it is not enough to fulfill the needs of Parker and her children.

There are schools. But she cannot afford extra books, pencils, etc. there is a school lunch programs, but two of her children are not of school age.

There are also health clinics. But they are in the towns, 8 miles far from her village. Her children cannot walk that long, and she has no money for the trip.

a. Explain the following: Poverty is looking into a black future.

Ans: It means that poor people have to live a restless life. They have to survive looking at the dark future of their children. It is also living without hope, better foods, medicinal care, proper sanitation, and proper education.

b. What does Parker mean by “The poor are always silent”?

Ans: It means that the poor are helpless and weak. They can’t speak louder due to their poverty. The poor have the role of listeners. They have to listen what others say. They lack resources so that they are always silent.

c. What writing strategy does the author use at the beginning of most of the paragraphs? Do you notice a recurring pattern? What is it?

Ans: Unemployment is one of the burning social problem of the world. It is a bizarre situation where people are qualified for the jobs for but not getting it. Many degree holders, teachers, innovators, etc are the victims of this social evil. We are failing to utilize valuable human resource due to unemployment.

The most important cause behind it is less availability of jobs. Other causes are defective governmental policies, lack of practical skill and increasing population. It is necessary to establish a stable government to make plans for youth employment.

Every year, many youths leave their country in a search of better opportunity. Every year, educated youths become unemployed due to theoretical knowledge. So, this social evil is devastating for every nation.  Many educated people are doing traditional farming due to lack of opportunities in the labor market.

As Nepal is non-industrial nation. Because of political unsteadiness and enormous corruption, developmental activities are in  exceptionally sluggish speed.  It is the main cause behind  obstructions for landing position opportunity for huge mass of youths. As a result, ‘brain drain’ happens.

Summing up, government has to play a very crucial role by minimizing the growing unemployment by increasing practical education as well as industrial areas. Population control is also another method to reduce it.

b. Using adjectives to highlight the futility of the situation, write a short definition essay on Growing up in Poverty.

Poverty is the devastating social evil of our society. It creates division in a society. People in a society is divided  between the haves and have-nots.  It has  political, economic, social, psychological and physical effects on poor people.

It is very difficult to grow up in poverty. We fail to fulfill our basic needs like food, shelter and clothing. We always become silent in poverty. We are deprived of basic human right in poverty. A person loses self confident, self-esteem, honor and dignity when he/she suffers from it.

It is a vicious circle that repeats from one generation to another generation, if one generation fails to climb the ladder of poverty. It is a shameful stage where nobody cares about you. You have to survive without the dignity of human. So, growing up poverty is a bay where you have to live until you reach your targeted land. Most of the victims of social crimes are poor people. They lack proper shelter and security to save them from the crimes. Innocent poor children are the major victims’ of it. The world’s major problems like child trafficking, malnutrition and  drug addiction are the results of devastating poverty.

The ultimate solution to reduce poverty is to spread  practical based free education to all. Government should focus on education. In the same way, it is necessary to increase employment opportunities to people because poverty and unemployment are interlinked to each other.

The emotional and mental effects are far reaching. A permanent sense of low self-esteem, lack of confidence and inadequacy is their constant companion. Their stress hormone cortisol responsible for regulating body’s response to threat from external changes is always spiked up leading to constantly feeling victimised, threatened and insecurity. Poorer mental health affects their ability to learn and adjust. If living a life constantly under the glare of poverty doesn’t kill them, it certainly leaves them weaker and withered and beaten.

However, the circumstance under which life is suffered under the shadow of poverty certainly leaves any individual much the worse as it deprives him of the right to achieve his potential as free and equal member of society.

Summing up, it is also true that some of the most illuminating examples of humanity, sensitivity and empathy has emerged from the darkest recesses of poverty. Life redeems and allows us to hope that better access to better opportunities and facilities of life shall perhaps one day help to free them from these shackles and allow to live life as an equal and deserving member of the society.

Post Views: 4,151
A Social Problem: Unemployment and what problems does she encounter? Define a social problem (homelessness Explain the following: Poverty is looking into a black future. How does Parker try to obtain help How is poverty difficult for Parker’s children? List some specific examples. racism) imitating Parker’s style. Theme and Exercise unemployment Unit-19 What is poverty? Jo Goodwin Parker Unit-19 What is poverty? Jo Goodwin Parker Summary Using adjectives to highlight the futility of the situation What does Parker mean by “The poor are always silent”? Why are people’s opinions and prejudices her greatest obstacles? write a short definition essay on Growing up in Poverty.
Share. Facebook Twitter Pinterest LinkedIn Tumblr Email