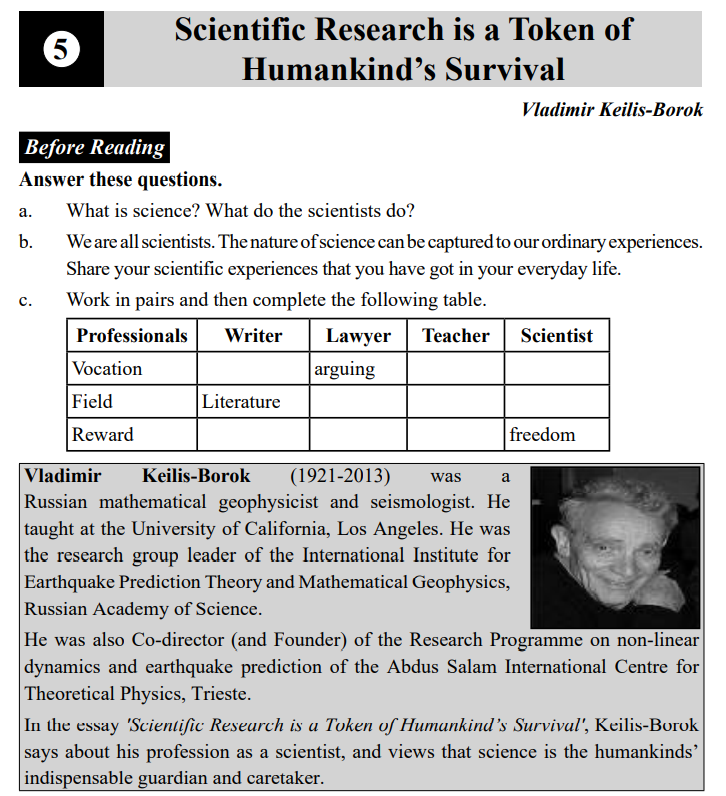 Scientific Research is a Token of Humankind’s Survival

a. What does a scientist get instead of big money?

Ans: A scientist gets  freedom, camaraderie and independence instead of big money.
b. What was the problem that the nuclear powers had faced?

Ans: The problem was the following. Suppose that:(i) the nuclear powers had signed agreement to stop the test of the new nuclear weapons, and (ii) one of the participants had violated this agreement and secretly made an underground nuclear explosion. The problem is: how can the other powers detect the violation?
c. In which area did Keilis Borok’s theoretical knowledge have a direct application?

Ans: Keilis Borok’s knowledge about earthquake had a direct application in the area of nuclear testing. He had done a research on how the earth shakes during an earthquake. Similar would be the effect of an underground nuclear explosion. This finding could stop any nuclear tests.
d. What was the important decision that the politicians took before Geneva Summit?

Ans: Before the Geneva Summit, the politicians of the most powerful countries decided to put a ban on nuclear weapon test. It was a very important decision about the future of humanity. This could stop the possibility of nuclear war and save humanity.
e. What are the natural and man-made disasters as mentioned by the author?

Ans: The natural and man-made disasters as mentioned by the author are earthquakes, self-inflicted destruction of megacities, environmental catastrophes, economic and social crises.

d. How does the essayist justify that scientific research is the humankind’s survival?

Ans: The writer says science can ensure our prosperity. It has the answer for life’s issues. Advances depend on logical examination. Anti-toxins, hardware, strands, mining, new fuel sources, progress in industry and transportation, speedy determination and treatment of infections are the aftereffects of hypotheses from science.

Legitimate use makes science our gatekeeper and overseer. Our endurance is conceivable in light of examination by researchers. A model is the atomic test boycott. This became conceivable when they figured out how to control any mysterious testing. This could stop the chance of atomic conflict and save humankind.

a. Everyone lives under the fear of annihilation by nuclear weapons. Explain this
statement.

Ans: Nuclear weapons are very dangerous for human beings.   In 1945, powers were made with the reason and expectation to kill a huge number of people and creatures, obliterate structures, geographic constructions, and toxic substance the very air we relax. These forces, are Nuclear Weapons.  The first Nuclear Weapon was the A-Bomb, made and tried by the US to drop on  Hiroshima and Nagasaki. The distinction between the A-Bomb and the advanced Hydrogen Bomb, is that the Hydrogen Bomb, is multiple times more damaging contrasted with the A-Bomb. At the point when the US dropped the A-Bomb on Hiroshima, it killed more than 100,000 individuals from the impact, with another 90,000 kicking the bucket between 3-6 months from intense radiation openness. This incident proves that it can annihilate all living beings. The nuclear powers had signed agreement to stop the test of the new nuclear weapons. Countries like North Korea and Iran had violated the agreement and secretly making an underground nuclear explosion. It proves that everyone lives under the fear of annihilation by nuclear weapons.

b. The essayist says ‘While there is science, there is hope of survival and well-being for all of us.’ Explain it.

Ans: The essayist says science can guarantee our wellbeing. It has the solution to life’s problems. Technologies are based on scientific research. Antibiotics, electronics, fibres, mining, new energy sources, progress in industry and transportation, quick diagnosis and treatment of diseases are the results of theories from science.

Proper use makes science our guardian and caretaker. Our survival is possible because of research by scientists. An example is the nuclear test ban. This became possible when they found a way to control any secret testing. This could stop the possibility of nuclear war and save humanity.

c. Is science a blessing or a curse? Write an essay on it.

Ans: Science has reformed the human life. A large part of the advancement that humanity has made in various fields directly from the stone age to the cutting edge age is because of the advancement made in the field of science. Material advancement as well as the psychological viewpoint of man has been impacted by it. It has made man’s life more agreeable. Horticulture, business, transport, correspondence and medication to give some examples are for the most part profoundly obliged to the marvels science has delivered.

Power is perhaps the best marvel of current science. It’s anything but a wellspring of energy. It can run any sort of hardware. With the assistance of power, we can light our rooms run transports and prepares, and lift water for water system.

The revelation and advancement of countless amazing fuel sources coal, petrol, petroleum gas, power, and so forth have worked with the development of quick methods of transport a correspondence, which thusly have changed the world into a worldwide town. Science has given man the methods for voyaging vehicles, trains, ships, and so on Man has even headed out to the moon. Quicker methods for transport can be used for sending food grains to survivors of starvation or pestilences across the globe, for moving furnished men for battling in far off places.

Science has two faces great and awful. It relies upon us which face we need to see. In the event that we utilize the blessings of science in a positive way with positive aim and toward certain path it will profit the humankind, however on the off chance that we abuse it, it will demonstrate unsafe to all. To save ourselves and the world in general from annihilation, we should utilize the blessings of science appropriately.

Class 11 New Compulsory English Unit-18 What I Require from Life by B. S. Haldane Summary, Theme and Exercise