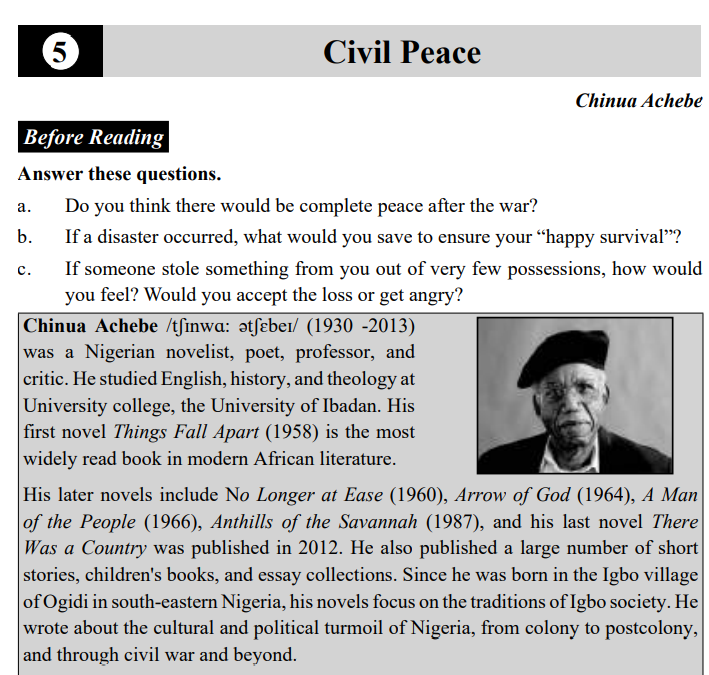 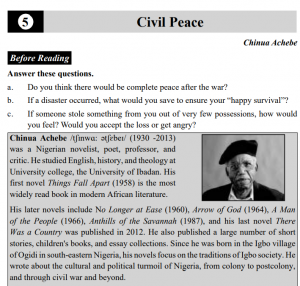 The story is about the effect of civil war in Nigeria. Jonathan Iwegbu is happy to survive the war. He feels very lucky and grateful for five blessings: himself, his wife and three out of their four children. As a bonus he finds his old house to move the family with some repair. He also gets his old bicycle back and makes money using it. The whole family begins to work. He gets some money from the government for returning rebel money. One night a group of thieves knock on his door and demand 100 pounds. Jonathan and his wife are surprised to see them coming to a poor family instead of the rich. Jonathan swears he has only 20, which they take and leave.

The story is a satire on Nigerian civil peace. But common people are affected by war everywhere. It is hard for the poor to make a living. Strangers come to demand money. Because of fake identities, whom to trust is uncertain. In Civil Peace by Chinua Achebe we have the subject of appreciation, confidence, battle, endurance, strength and acknowledgment. Jonathan is appreciative that he and his family have endured the conflict. He may have lost one child however this doesn’t diminish the appreciation that Jonathan has in prevailing with regards to enduring the conflict.

a. Why did Jonathan think of himself as ‘extraordinarily lucky’?

Ans:  He feels lucky and happy to be alive after the war — and more so with his family.
b. What are the ‘five blessings’ for which Jonathan is grateful?

Ans: He had come out of the war with five inestimable blessings – his head, his wife Maria’s head and the heads of three out of their four children. As a bonus he also had his old bicycle – a miracle too but naturally not to be compared to the safety of five human heads.
c. Why did Jonathan mistrust the officer who wanted to take his bicycle? What
does this tell you about the situation in Nigeria?

Ans: Jonathan had some doubts about the officer who wanted to take his bicycle in the name of military use. It was at the height of the civil war in Nigeria. Because of fake identities, whom to trust was uncertain.
d. What visitors might be at the door? Are Jonathan and his wife completely
surprised? Explain.

Ans: Police or thieves or neighbours might be at the door. Yes, Jonathan and his wife are completely surprised because of  the Knock at the door is hard late at night. The second time the knocking came it was so loud and imperious that the rickety old door could have fallen down. The visitors might be thieves who came to rob his money at night.
e. Why does no one in the neighbourhood respond when the thieves pound on
Jonathan’s door? Why do the thieves call for the police?

Ans:  Nobody in the area reacts when the thieves beat on Jonathan’s door because they were also completely paralysed by the terror. The thieves call for the police since they realize very well that nobody will come to help Jonathan’s family.

Ans: Jonathan uses the expression “Nothing puzzles God” at whatever point something phenomenal occurs with him. The expression means  that God knows each and everything. God will reward us according to our deeds. He utilizes this line when he gets his bike back in a fine condition out of the ground. Then, He utilizes it when he discovers his home actually remaining after the conflict. This expression proves his optimistic behaviour in his life. He is content with what God does to his family.

b. How does Jonathan change as he experiences the conflicts in his life? Explain.

Ans: Jonathan is appreciative that he and his family have endured the conflict. He may have lost one child however this doesn’t diminish the appreciation that Jonathan has in prevailing with regards to enduring the conflict. Jonathan realizes that in contrast with others he is fortunate. In the event that anything Jonathan is hopeful about his and his family’s future. The nation may have been destroyed during the conflict yet Jonathan can in any case see something sure about what’s to come. The way that Jonathan’s home is as yet flawless is seen upon as a gift by Jonathan especially when he understands that others have not been as lucky.

It is likewise fascinating that Jonathan makes a triumph out of his and his everyday’s life after the conflict. On the off chance that anything through the assistance of his bike Jonathan can open up a bar which gives cash to his family.  They keep on battling similarly as when the conflict was seething. In the event that anything Jonathan has situated himself well through his resourcefulness with the truth being that his life may have worked on after the conflict. Where others keep on striving Jonathan seems to flourish. Which might be the point that Achebe is endeavoring to make. He might be proposing that after the conflict a few group like Jonathan were fortunate. Through difficult work they succeeded and had the option to remake their lives.

e. Why do you think the thieves who come to rob Jonathan speak English with a
heavier African accent than Jonathan does?

Ans: I think the thieves who came to rob Jonathan speak English with a heavier African accent then Jonathan because they wanted to prove that they are superior white American than poor Nigerian like Jonathan.
f. The title of the story “Civil Peace” itself is ironical as there is little to differentiate ‘civil peace’ from ‘civil war’. Do you think that the title of this story is appropriate, or would “Civil War” have been a better title? Explain.

Ans: Yes, the title of the story “Civil Peace” itself is ironical as there is little to differentiate ‘civil peace’ from ‘civil war’. The title of Chinua Achebe’s short story “Civil Peace” is particularly fascinating on the grounds that it is utilized from an unexpected perspective. The story follows Jonathan Iwegbu as he gathers the pieces of his life after the finish of the Nigerian Civil War. The conflict leaves a gigantic measure of obliteration afterward, and Jonathan gets together what he can to restore his life. The title of the story is amusing in light of the fact that despite the fact that the conflict has reached a conclusion, the region is as yet tumultuous and loaded up with hardship. Without a doubt, a posse of burglars utilize the expression “civil peace” when they deny Iwegbu and his family in the dead of night.Thus, Achebe utilizes the title amusingly to feature the viciousness actually present in a post-war Nigeria.

a. How would you describe the civil peace in Nigeria?

Ans: The story makes it clear that civil peace in Nigeria following the war was only in name. Common people are affected even after the end of war. It is hard for the poor to make a living. Strangers come to demand money. Because of fake identities, whom to trust is uncertain.

The example of what happens to Jonathan’s family is a possible case of the civil peace in Nigeria. One night a group of thieves come to his house. They demand 100 pounds, but Jonathan swears he has only 20. Although not convinced, they take the money and leave.

b. What kind of attitude towards life do you think you would have if your situation was similar to that of Jonathan’s?

Ans: My attitude towards life can be summed up with very cheerful and optimistic words if my situation was similar to that of Jonathan’s . I will be grateful and thankful for mercies, like the reclamation of bike, and the survival of my “family’s five heads.” I will like to continue existence of my old house because there is nothing greater than the survival of  wife and children. A person’s attitude is their way of thinking about life and living that is reflected in their behavior.
c. Draw the character sketch of Jonathan Iwegbu.

Jonathan is cleverer than others. He makes money using his old bicycle. He is quicker to grab opportunities. He finds his old house and moves his family. He sells wine. He also gets government money by returning rebel money.