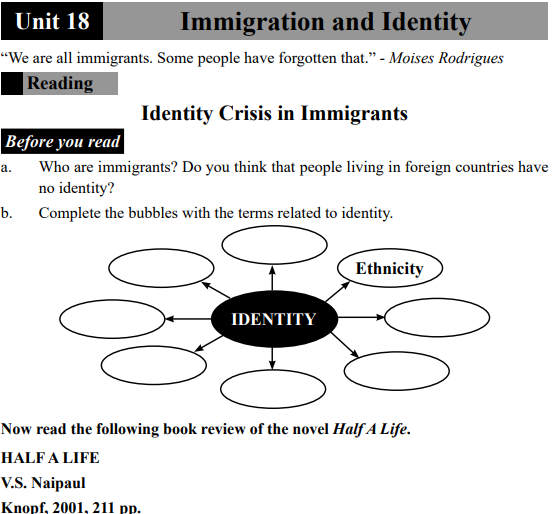 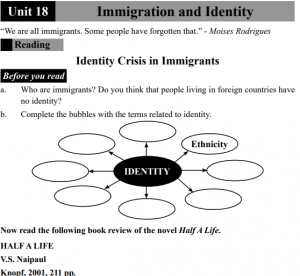 Ways with words
A. Find the words from the text to solve the crossword puzzle below. The meanings of the words are given in the clues.

Across
2. as is certain to happen : Inevitably
4. famous and respected: Eminent
6. a temporary stay: Sojourn
7. knowing everything: Omniscient
Down
1. the state of being preoccupied: Preoccupation
3. anxious or fearful that something bad will happen: Apprehensive
5. a person of mixed white and black ancestry: Mulatto

B. Find the meanings of the following words in a dictionary as they are used in the text.
melancholy, elusive, motif, disdain, fabricate, intoxicate, resentment

melancholy: a feeling of pensive sadness

motif: a decorative image or design

disdain: consider to be unworthy

fabricate: invent in order to deceive.

intoxicate: alcoholic drink or a drug cause to lose control

resentment: a feeling of bitter displeasure

a. How is Willie Chandran different from the rest of his family?

Ans: He is different from the rest of his family because he spends two decades in search of a life he can call his own.
b. Who is the main character of Half A Life? How is he described?

Ansl: Willie Chandran is the main character of Half A Life. He is described as a person who he spends two decades in search of a life he can call his own.  He wanted to know who he is and where he comes from. He hates for his partial existence.
c. Why does Willie leave India?

Ans: He leaves India because he gets a scholarship to a second-rate college in London.
d. What is the revelation that Willie begin to feel in college and in London?

Ans: Willie began to understand that he was free to present himself as he wished. He could, as it were, write his own revolution. The possibilities were dizzying. He could, within reason, remake himself and his past and his ancestry.
e. Why does Willie accompany Ana?

Ans: As soon as he saw her all his anxieties fell away, and he was conquered. She behaved as though she had always known him, and had always liked him. And what was most intoxicating for Willie was that for the first time in his life he felt himself in the presence of someone who accepted him completely.
f. What is the central issue Naipal has raised in the novel?

The novel presents the central issue of identity crisis. It relates the narrative of Willie Somerset Chandran, the child of a Brahmin father and a Dalit mother who is disappointed by his split parental personality and this acknowledgment inspires him to dream of his own particular character.

Critical thinking
a. What kind of divided identity is depicted in the novel Half A Life? How do characters in the novel try to create new identities for themselves? Explain.

Ans:  The novel presents the central issue of divided identity of the central character, Willie Chandran. It relates the narrative of  Chandran, the child of a Brahmin father and a Dalit mother who is disappointed by his split parental personality and this acknowledgment inspires him to dream of his own particular character.

Willie leaves his homeland looking for himself and envisions a reality where his past couldn’t frequent him and carry on with a daily existence professing to be somebody else.

The story starts with Willie examining his dad concerning his center name, Somerset. While taking apart his complete name, Willie finds that his center name came from a renowned British essayist, Somerset Maugham, who once visited his dad. His first name is of a Christian sort, and his last name uncovers his mixed genealogical roots. This information leaves Willie searching for a legacy of which he can be glad, an entire presence instead of a half.

Willie realizes his mom’s social and monetary status is on the base bar of society’s financial stepping stool, and he is embarrassed about that reality. Therefore, his endurance nature drives him to a dreamland, one in which he professes to be somebody he isn’t, somebody he shouldn’t be humiliated by.

This misleading turns into an ordinary event for Willie, as he weaves a serious tangled snare of lies about what his identity is and where he comes from. His contempt for his fractional presence and for his folks drives Willie to leave the home looking for himself.

b. Discuss the similarities between the author and the protagonist in the noivel?

Ans: V. S. Naipaul is the author of the novel Half a Life. Like his central character Naipaul’s  ancestors were also from India.  In the late 19th century, Naipaul’s grandparents had emigrated from India to work in Trinidad’s plantations.  Like Naipaul protagonist is also a writer. Both have mixed identity.

B. Write a review of a book/film you have recently read or watched.

I like watching films and watch one each day. I also like reading and often read books. Recently I saw a film named “Jhola” based on a story by Krishna Dharawasi. Because I had already read this book, I went to see its film version.

The main character in this film is a young widow who struggles for life.  He leaves his family and country because he wants to earn money for a better future of his family. He goes to Lhasa, a province in China. There he works hard and earns enough. Then he decides to return. But he falls ill on the way. His friends leave him. Fortunately, a Sherpa, an inhabitant of Himalayan region, finds him and takes him to his house. He treats Madan, who recovers soon. While taking leave, Madan touches the man’s feet although he belongs to a higher caste. Here Madan utters the most famous line in Nepali literary works: a man becomes great not because of his caste but because of his noble heart. On receiving the news of his death, His wife and mother cannot bear this, and both die before he reaches home. The book ends as Madan sees no use of living without his beloved wife and mother.

The film, like the book, has shown the reality of that time as Madan represents his poor fellow countrymen. But it is also relevant today because many Nepalese are going to foreign countries to earn money for the better future of the family.