Summary and Theme of the Essay On Libraries by Oliver Sacks: Class 12 Compulsory English 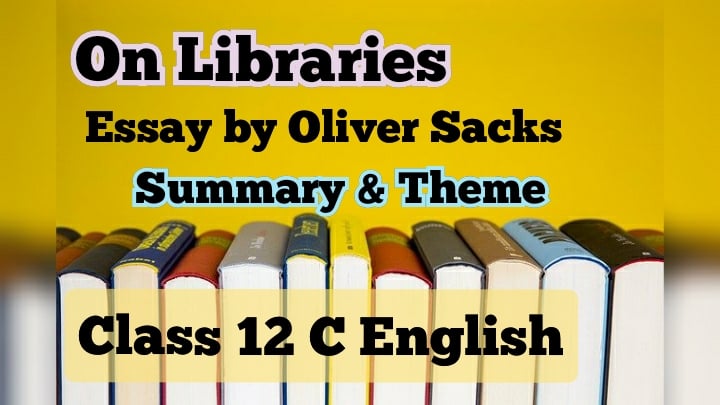 On Libraries by Oliver Sacks

Summary and Theme of the Essay On Libraries by Oliver Sacks

The narrator grew up in his father’s library. The oak-panelled library was inherited from his forefathers. The library was full of Henrik Ibsen plays and past generation poem. He is fond of reading books. His major hobby is reading and exploring books.

The library had also adventure and history books. The narrator used to read fictional books in his childhood. Jungle Book was his favourite. His mother also followed the same path of his father. She read literature. She had a library. She collected books of different writers like Emily Dickinson, George Bernard Shaw, etc. He also found medical books in the library.

He used to enjoy reading books in his small lab. He used to forget his lunch as well as dinner during his reading. He remembered reading books since he was three or four years old.

He spent his adulthood in Willesden Public library in London. He started his formal schooling from there. He like active reading in library rather than passive learning in a school. He considered himself active and self learner. He used to enjoy reading books he wanted. He started reading chemistry books at Science Museum Library at his old age.

He started to write his own biography after reading Theodore Hoor’s book. He got information and ideas from the British Museum Library to complete his biography. His most beloved library was The Library of Queen’s College. He also studied ancient texts and 17th and 18th centuries writings.

He shifted to New York in 1965. He lived in a small apartment. It was not easier to read and write in the apartment. But he managed to write some books like Migraine. He joined Albert Einstein college of medicine and started reading and writing. He found that place very appropriate to continue his academic activities. He didn’t leave his habit of visiting libraries.

In 1990, he found that students were ignoring studying books from library because of digital world. They used to give much importance to computers rather than real books. They were attracted towards virtual readings rather than physical reading. Books were ignored. He took such change as a murder or crime. He believed that it would destroy human wisdom. Some important books were digitized at that time. But most of the books were ignored for reading. But he knew that such digital libraries can’t inspire youth to create imagination and creativity.

The essay is about the importance of reading books. The narrator has spent his whole life in exploring the world of books. Books can lead a person to an imaginative world. People become creative and wise after reading books. So, we must give priority to reading real books rather than digitized one. In this way, the essayist shows the negative sides of digitalized world where priority is given to virtual reading rather than physical one.