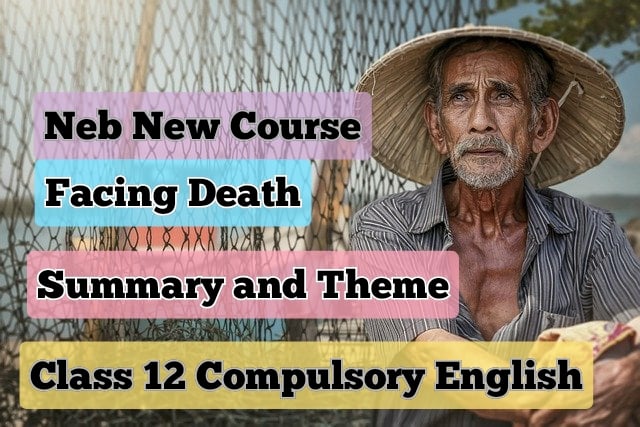 B: Three Daughters of Durand: Adele, Annette and Therese

Summary and Theme of Facing Death:

Facing Death is one act play about Durand family. The central character of the play is Durand. He is a widower, pensioner and former railroad employee. He is renting his house to lodgers to earn money. His intention is to provide better life to his three daughters. He is concerned about his facing death. He wants to secure his children’s future by securing them financially. In this way, the story is about a father’s responsibility and love towards his children. He has sacrificed everything for his children. Durand is a bankrupt father. But he works day and night for his daughter.

The father is financially ruined person. His relation is not good with his daughters. The whole family is struggling financially for ten years. They are fighting with the financial crisis. As a result, they have to change their home into a lodge. His daughter Adele handles the kitchen. The father not only serves but also maintains the sanitation in the lodge. He cleans and serves the meal in the hotel. Annette and Therese don’t help his father. They are busy in playing, singing and flirting with the guest. They ignore different works of the lodge. They are irresponsible to their family. Durand faced different difficulties to raise his daughters after the death of his wife. He borrowed money from neighbours to raise his family. They encounter financial crisis. He wants to solve the present crisis in his family. He needs money to run his lodge. He has to provide salary to different employees of his lodge like grocer, butcher and baker. His servant brings unpaid bills rather than breads. It shows the exact financial situation in his family. His son Rene died during his childhood. He still remembers his son. He buys candles to commemorate the death anniversary.

Antonio is a paying guest in Durand’s lodge. Durand tells him to leave the lodge because he can’t provide supplies to him. He wants to stay there. He is ready to pay in advance to stay there. But Durand rejects his offer. Durand faced crisis in spring because he had no visitors. One day, he finds Therese flirting and kissing with Antonio. Durand drags him away from his lodge. He also rejects his money. Therese and Annette find their father’s behaviour disgusting. They aren’t happy with their father. They started to disrespect him. They take a glass of milk which Durand is going to drink. They force him to drink water. Durand eats rat’s feed out of hunger. He doesn’t have money to buy bread. His daughters accuse him for not taking care of the lodge. They tell that their father is the sole responsible for their present condition of the family. They would be happy, if they had their mother. In fact, thier mother used to spend money in lottery. She was addicted to lottery.