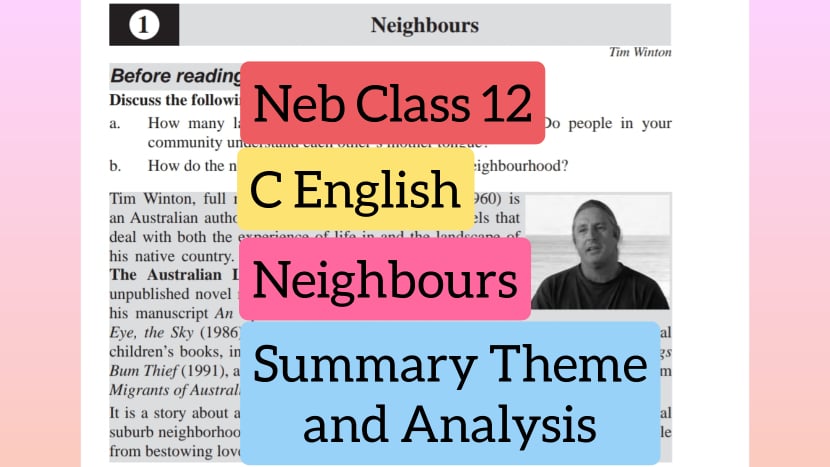 Short Summary of the story Neighbours by Tim Winton:

Neighbours is a story about a young couple who shift to a place outside the city. In the new society they encountered with European immigrants. They found the strange and disgusting customs of their neighbours. They didn’t feel like home in their new society. They were fed up with loud noises from the neighbours. They had prejudice for their new neighbours and vice versa.

The author has presented the characters as role models without proper names. The couple used to live in expansive suburb area before  shifting to the new place. The couple didn’t like to talk with their new neighbours at the beginning.

The young man was busy in writing thesis on the development of the 20th century novel. The woman did her job in a hospital. Their neighbours wanted to do friendship with them. So, the neighbours started talking with them. They also offered their help to the young couple. The couple realized that their neighbours were very generous. In spring, without any plan the woman became pregnant.  The neighbours came to know about it. They were excited after knowing about the pregnancy.  The society was ready to help the couple. The couple’s society became happy when the young woman gave birth to a child.

Analysis  of the story Neighbours  by Tim Winton

The story presents the transition of a person into new society and new stages of life. New experiences are really shocking for the individuals as well as to readers. It captures different aspects of life like friendship, truth and respect.

The story brings the multicultural situation where an individual faces different challenges to step ahead. So the readers experiences multicultural setting in this story. In this story, there is one young couple.

They face different challenges in their life due to their transition into multicultural society. They step into new stage of their life. They encounter with a lower socioeconomic people and European migrants. We don’t find names of the couple.

The writer doesn’t want to reveal it because he wants to generalize the couple. In the story, we encounter with Macedonian family, Polish man,etc. The writer has used people’s culture to identify them rather than their names. So, the story highlights the cultural differences of different characters. The young couple are innocent about the different cultures of the world. They are learning by experiencing it. They are accepting new cultures slowly and gradually. Australia is multicultural society.

So, the writer is showing the situation of an individual in Australia’s multicultural society. A person has to accept new society and culture to adopt himself in the new environment. An individual has to sacrifice his/her past cultures to move forward.

Theme of the Story:

The central theme of the story is that people from different cultures can live together in a society peacefully. It tries to prove that love and compassion are major components of a society to bind multicultural and multilingual people together.

Tim Winton wants to prove that community help is very important in a society. He highlights the importance of the co-operation and family. Variation of language, culture and nationality can’t stop community to spread the message of love, unity and selfless help.  We can help and love our neighbours without knowing their culture and language.

Newly married a young couple is the main protagonist of the story. The story moves around a city of Australia. A young couple has just migrated to a city in Australia. They are unaware about the new multicultural society and its activities. They live in a small home. It has high ceilings. It has also paned windows.

One day, the young man saw the next door little boy urinating in the street. He was more disturbed by such activities. The young couple planted onions, cabbage in the autumn. When they were planting the vegetables, their neighbours came to help them. Their neighbours gave advice about mulching and spacing hilling. One of their neighbour gave them garlic cloves.

The widower helped them to rebuild henhouse. The couple didn’t understand her language. In winter, the couple gave cabbage to their neighbours. The young man was busy in writing the thesis on the topic of the development of 20th century novel. He used to help his wife by cooking dinner. In spring, without any plan the woman became pregnant. They were not ready to take the responsibility but they accepted it. The woman took leave from her job to take care of her body.   The neighbours came to know about it. They were excited after knowing about the pregnancy.

The society was ready to help the couple. They received gifts like chocolate, cigarettes, etc. from their neighbours for her pregnancy. Italian woman offered names for her baby. The couple realized the importance of community help.

They started to love their neighbours. They were feeling comfortable in their new multicultural and multilingual society of Australia. They stopped complaining about their neighbours. The couple’s society became happy when the young woman gave birth to a child.  The Macedonian young man came to see the baby when he heard the cry of the baby. The young couple felt stange. The baby’s father realized that his novel was incomplete without this climax.

In this way, the story captures the advantages of multicultural society than an individualistic society. The story proves that immigrants are symbol of social enrichment. It helps to grow a society towards prosperity and unity. It brings unity in diversity.

At the end of the story, the couple realized the power of multicultural community with selfless help. The couple learned the message that prejudice and discrimination are the result of  human ignorance. It is very important to accept our new society’s multiculture to adopt ourselves in it.