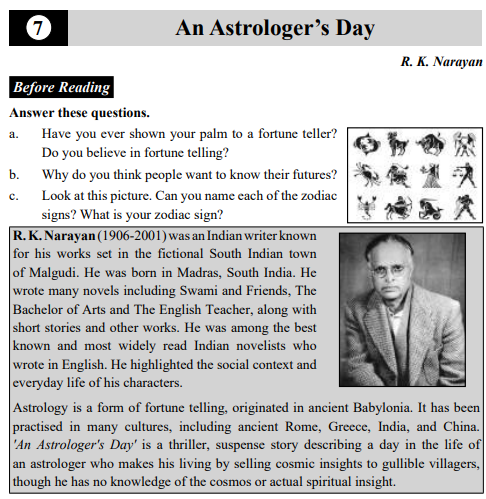 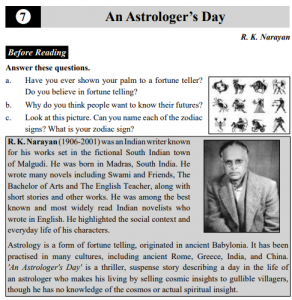 The story describes a day in the life of a typical Indian astrologer with an unexpected event. He sits in a busy marketplace. Though a fraud, he can convince people by saying what they want to hear and offering solutions. At the end of this day comes a stranger, who challenges him to tell exact details. The astrologer recognizes him and gives every detail. That man, Guru Nayak, was nearly killed with a knife and pushed into a well years ago. In fact, the astrologer himself did it. But he lies that the attacker was already killed in an accident. Later at home, he shares facts with his wife.

Answer the following questions.
a. How does the astrologer’s appearance help him attract customers? How does he
help the customers satisfy their needs?

Ans: The astrologer’s appearance helps him attract customers because his forehead was resplendent with sacred ash and vermilion, and his eyes sparkled with a sharp abnormal gleam which was really an outcome of a continual searching look for customers, but which his simple clients took to be a prophetic light and felt comforted. He helps the customers satisfy their needs by saying things which please and astonish everyone.
b. How do you characterise the astrologer’s attitude toward the stranger?

Ans: The astrologer’s attitude suddenly changes when he encountered the stranger. He felt challenged. The stranger bribed him to tell his questions answers. When the astrologer caught a glimpse of his face by the match-light, he felt very uncomfortable. He had strong and active voice. He used to satisfy everyone by saying things which please and astonish everyone. But the astrologer shivered in his grip; and his voice shook and became faint when he saw face of the stranger.
c. What details does the astrologer give the stranger about his past?

Ans: He advises the stranger to go home immediately because he predicts a great danger to the stranger’s life if he goes from home.
e. What is your reaction to the conversation between the astrologer and his wife?

Ans: From the conversation with his wife, we come to know about the astrologer’s real life, crime and confession. He had nearly killed a man in his village. This happened in his youth when they were drunk and quarrelled.

a. Suspense is the feeling of anticipation you may have as you read. In this story,
what details contributed to your feelings of suspense and surprise? Explain.

Ans: The writer creates suspense is the story by giving step-by-step details from the astrologer’s past life. As we read, we come to know that he left his home secretly and never returned. At the end of the story, we see his wife and and learn that he had nearly killed a friend in his village.

Another way to create surprise is the writer’s comments about the astrologer’s job. We see his typical appearance, but the writer says this is to attract customers. He is a fraud, who he became an astrologer to earn easy money.

b. Analyze the conflicts in “An Astrologer’s Day.” Explain how the conflicts are resolved and what they reveal about the characters involved in the story.

d. Description helps readers visualize what is happening in a story. What details and techniques does the author use to describe the astrologer?

Ans:  R.K. Narayan’s “An Astrologer’s Day” uses descriptive technique to helps readers visualize what is happening in a story. The commercial center and its sellers is portrayed in genuinely striking subtlety in the story. Indian market is presented as the open air markets where merchants of food, specialties and apparel sell their products. The astrologer wears a saffron-shaded turban folded over his head. He says clients are attracted to him “as honey bees are drawn to universe or dahlia stalks.” Before we even see the commercial center we see that it’s anything but a position of visual wonder, in view of the depiction of the celestial prophet’s arrangements.

The actual spot is a clamor of action. The crystal gazer’s area in the market is “under the branches of a spreading tamarind tree.” One visual detail that appears to be significant and which makes it conceivable to envision what it looks like is the reality there is no city lighting, so merchants should give their own lights.

The story plot is followed by a description of the astrologer’s way of doing business: it is discovered he knows almost nothing about astrology, and simply speaks as the mood takes him, so the random quality of light and shadow seems appropriate here.

e. Irony is a contrast between appearances and reality. What is ironic about Guru Nayak’s meeting with the astrologer?

Ans: There is irony in the astrologer’s meeting with Guru Nayak. He had nearly killed this man and run away from village. Now Nayak happens to come to him but does not recognize him. He asks the astrologer to read his palm. He does not know that it is the man he is searching for revenge. But we know. It is ironic that Guru Nayak gets the opposite of what he wants. He wants the man who nearly killed him. He has come to the astrologer with this hope. But the astrologer tells him to go home for safety.

f. How does the astrologer’s manner of dress suit his character?

Ans: The astrologer’s manner of dress helps him attract customers because his forehead was resplendent with sacred ash and vermilion, and his eyes sparkled with a sharp abnormal gleam which was really an outcome of a continual searching look for customers, but which his simple clients took to be a prophetic light and felt comforted. He helps the customers satisfy their needs by saying things which please and astonish everyone.

a. The astrologer attracts many customers in the street who are pleased and astonished by what he tells them. What does this tell you about the people of the town walking in the street?

Ans: The astrologer attracts many customers in the street who are pleased and astonished by what he tells them. People of the town walking in the street are busy people. They have certain big dreams. They want to achieve rapid progress in their lives. As a result, they want to check their future before doing anything. So, they trap in a web of street astrologer. Road astrologer ares a common figure. The astrologer catches the sentiments of town people by understanding their psychology. There are students, businessmen, housewife, youngsters,etc who want to know unknown things about their life. All people have some problems in their lives and all want easy and quick solution. As a result, they trap in a vicious circle of the street astrology once in their life.

Ans: All people have some problems in their lives and all want easy and quick solution. They visit different astrologers to know their mysterious future. An astrologer treats them psychologically like a doctor calms down a patient. Most people have certain big dreams. They want to achieve rapid progress in their lives. As a result, they want to check their future before doing anything by visiting an astrologer. Some genuine astrologers can really help us to know our future by studying our birth chart.

Astrology is the investigation of the positions and parts of heavenly bodies in this conviction that they are impacted by normal common occasions and on the course of human issues.

It is accepted that the planets influence our lines from multiple points of view. They assume a significant part in our universe. It has been explored to demonstrate that climate and quakes can be dictated by a more intensive gander at planets. These realities can assist with saving lives.

c. Is astrology a good practice of fortune telling or is it just a blind faith? Give
reasons.

Ans: Astrology is the study of positions and aspects of celestial bodies in the belief that they have an influence on the course of natural earthly occurrences and human affairs. People call in and get the predictions they have been looking for.

The study of astrology may seem like a world full of mysticism and uncertainty. It is natural to ask whether a person’s personality traits can be determined by planet alignment; After all it seems far-fetched. Astrology and zodiac are much more complex than the average person. Unless you take the time to fully research and understand astrology, it is impossible to obtain the most accurate amount profile.

In ancient times, astrology was closely linked to such fields as astronomy, philosophy, and medicine. Astrology is a wide-ranging topic with deep roots in history, which should be broken to fully understand it. The average person only knows about the signs of his Sun; This is the beginning of only one zodiac profile. Each planet in our solar system represents a certain aspect of life. For the most accurate reading of your zodiac, you will need to know which symbol was affecting each planet at the time and time of your birth. It can be as specific as the degree of which the planet is affected by its respective symbol. If you are not aware of the depth of the study astrology, then I encourage you to find out.

I can not explain how or how the amount is valid, but I encourage you to give at least a chance to astrology. It will take less than five minutes to enter your information in a website and read the information you give. Whether you are a total astrological astrologer or a horoscope every time you come out of curiosity, you should take the time to know a little more about yourself through astrology.