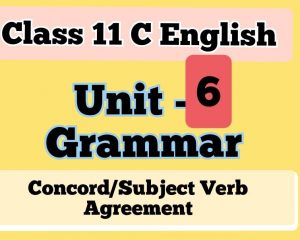 A thousand kilometres is a long distance.
Six million dollars is what the business needs.

Example: with uncountable, use singular

Some of the sugar is on the ground.

Example: with countable, use plural.

Some of the stones are on the table.

Example: Ram and Hari are friends.

Complete the sentences by choosing the correct verbs from the brackets.

Are the following sentences correct? If not, correct them.

a) Every one of the workers receive the same benefits.

Ans: Every one of the workers receives the same benefits.

b) There is two gerbils in my bathroom.

Ans: There are two gerbils in my bathroom.

c) Both of my friends live in Kathmandu.

Ans: Both of my friends live in Kathmandu.

d) Scissors is used to have our hair cut.

Ans: Scissors is used to have our hair cut.

e) You and your friends are welcome to join us

Ans: You and your friends are welcome to join us

f) Are the news on at five or six?

Ans: Is the news on at five or six?

g) The man with all his children live in the city.

Ans: The man with all his children lives in the city.