Class 11 New Compulsory English Unit-17 How to Live Before you Die? by Steve Jobs Summary, Theme and Exercise 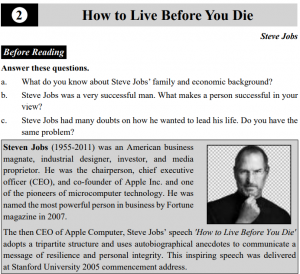 Theme of Unit-17  How to Live Before you Die?

The then CEO of Apple Computer, Steve Jobs’ speech ‘How to Live Before You Die’ adopts a tripartite structure and uses autobiographical anecdotes to communicate a message of resilience and personal integrity. This inspiring speech was delivered at Stanford University 2005 commencement address.

a. What is the story about Steve Jobs’ birth?

Ans: His biological mother was a young, unwed college graduate student, and she decided to put him up for adoption. She felt very strongly that the child should be adopted by college graduates. Everything was all set for him to be adopted at birth by a lawyer and his wife.They decided at the last minute that they really wanted a girl. The lawyer family didn’t adopt him.  So his parents (Paul Jobs and Clara Jobs) who were on a waiting list adopted him with the promise that the child would someday go to college.

b. What does he mean when he says, “you can’t connect the dots looking forward; you can only connect them looking backwards”?

Ans: In Steve Jobs speech, he says that  “you can’t connect the dots looking forward; you can only connect them looking backwards”. It means that life is full of uncertainty and suspense. People make plans to get further success but no one can  guarantee success.  Something is always lacking in it. We face defeat as well as victory in our life. But we should analyze and connect our dots (experiences ) looking backward. It means that we should learn lessons from our past to step further. He was dumped by his girlfriend. He also failed to get job at McKinsey. He wasted his  four precious years without getting support from anyone. But he became successful at last. It proves that in our life, we shouldn’t be worried about our failure because one day all the dots will be connected to bring something great.

Ans: When Steve Jobs turned 30, he got fired by Apple company. As Apple grew he hired someone who he thought was very talented to run the company with him, and for the first year or so things went well. But then their visions of the future began to diverge and eventually they had a falling out. When they did, the company Board of Directors sided with him. So at 30 he was out from the company.

d. Jobs contends that you need to love to do what you do in order to be great at it. Do you agree or disagree? Why?

Ans: Yes, I agree with Jobs’ statement that we must love what we do to become great. He started Apple company, but he had to leave later. Then he continued with more creative ideas because he loved his work. He started NeXT and made it so good that Apple finally bought it.
e. Is death really life’s greatest invention?

Ans: As Jobs says, death is life’s greatest invention. It is life’s change agent to clear out the old and make way for the new. It is the final destination and the only truth. Knowing that we are dying soon, we do what is really important.

d. Which style of speech is used by the speaker to persuade the audience?

e. It is not easy to motivate others. How do you think Steve Jobs’ speech is so inspiring?

Ans:  Jobs’ speech inspires us to keep hope even after a great loss. His speech shows his great success that came with hard work and dedication in spite of poor and difficult life situations. He motivates us to love our work for success.

f. Why do you think Steve Jobs used the personal narrative story telling technique in his speech? What influence does it have on the audiences?

Ans: I think that Steve Jobs used the personal narrative story telling technique to inspire the audience to follow their dreams. The speech uses a personal as well as  informal style. He presents his career experiences with the personal narrative.  He narrates his personal facts to capture the audience’s attention. The technique encourages the audience to value their passion and courage. He shares his personal journey from zero to Apple company. He gives every details of his life using the technique. He shares his own three stories about his life.

a. One of Steve Jobs mottos was: ‘Think differently’. Can this make a person succeed in life? What challenges are there in thinking differently?

Ans:  One of Steve Jobs mottos was: ‘Think differently’. Yes, it can make a person succeed in life, if he/she uses it properly and seriously. The person should understand its meaning to use it properly.’Think differently’ means doing unique and creative work to recognize our identity in global scenario. We need to be bold in our choice to gain something better in our life. We should present ourselves like an artist who creates unique creations. Steve jobs’ different thinking created the Apple company which is known for it unique products. A person has to face different challenges when he/she thinks differently because he/she has to go beyond stereotypical ideas. The person may face social, cultural, technological, economical and political challenges to reach the ladder of success.

b. What does the slogan “Stay hungry; stay foolish” mean to you?

Ans: The slogan ”Stay hungry” means stay eager and active to explore new things in life. ”Stay foolish” means trying new challenges in life. The slogan suggests us to be curious in our life to get what we want. It helps to gain our desired dreams. In a nutshell, he means that sometimes we should take risk in our life to achieve something great.

c. What does it mean to be a visionary? What makes Steve Jobs different from a fortune teller?

Ans:   Like Jobs, visionaries have long-term visions and plans. They set the direction of future and work hard to get there. Their dream is to change the present situation and make it better. Visionaries like Jobs think not only about self but also about society.

Jobs is very different from a fortune teller.  People like jobs lead the society with new visions. But fortune tellers just tell about about people’s life. They have no more role to play for the development of society. Progress is the result of dedication of visionaries like Jobs.