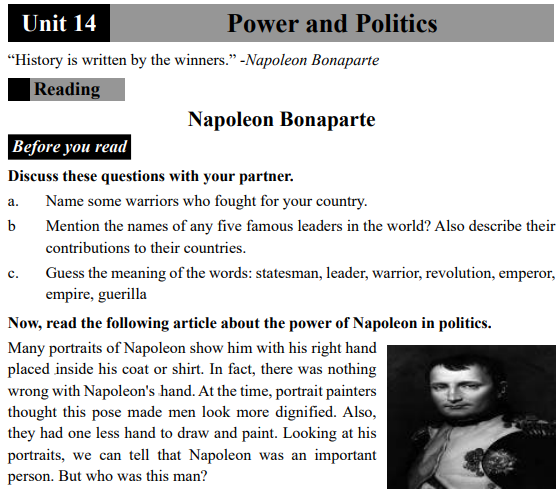 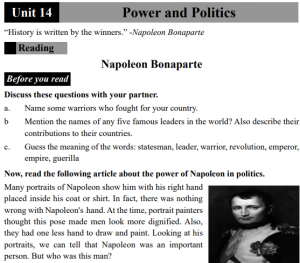 Ways with words
A. Choose the correct meaning of the underlined word.
a. Many portraits of Napoleon show him with his right hand placed inside his coat.

b. Napoleon won one victory after another, defeating the Austrians in eighteen battles.
i. beating ii. joining iii. fighting iv. directing

d. They announced France a republic.
i. officially declared

f. There was no place to house his soldiers in the bitter Russian winter.
i. difficult ii. cold iii. dark iv. empty

g. Napoleon was humiliated when he was defeated.
i. tortured ii. punished iii. confused iv. shamed

B. Guess the meanings to these words from the text. Check in your dictionary and make sentences of your own.
violent, execute, ancient, alliance, brilliant, genius, consul, invading

We witnessed a violent struggle between police and protesters.

execute: Put into an effect

If I execute a difficult plan, I successfully perform it.

Ancient: belonging to the distant past

Ancient Greece is the source of knowledge.

Alliance: formally united and working together

They form an alliance to work together.

She gave a brilliant performance.

He’s some kind of mathematical genius.

Consul: a diplomat appointed by a government to protect its commercial interests

The Consul wrote rapidly and with great gravity.

We abandoned our houses to the invading forces.

D. Find the meanings of the following noun phrases and use them in sentences.

Vice-President: an executive officer ranking  below a president

He is vice president of the company Morange.

Editor-in-chief: the principal editor of a publication

We offered her the position of editor-in-chief.

She is the deputy mayor of our municipality.

Joint-secretary: a post and a rank under the Central Staffing Scheme of the Government

Under-secretary: a title for a person who works for and has a lower rank than a secretary

He is Under-Secretary of State for Foreign Affairs.

Vice-Chancellor: an officer ranking next below a chancellor

The Vice–Chancellor is the principal academic and administrative officer of the University.

Attorney-general: the most important government lawyer

He is responsible to assist the government in all its legal matters.

Dr.Ram Baran Yadav served as the first president of Nepal.

Sub-editor: a person who checks and makes changes to texts for a newspaper.

Swarup Acharya is the sub-editor of the Kantipur publications.

co-author: a person who is helping the author in writing

Friedrich Engels is the co-author of the Communist Manifesto.

a. Where was Napoleon from?

Ans: He was from the French island of Corsica.
b. Why did poor and middle-class people declare France a republic?

Ans: Tired of paying heavy taxes so the king and his nobles could live in luxury, poor and middle class people  declared France a republic  to pay taxes according to their wealth.

c. When did Napoleon declare himself emperor of France?

Ans: Napoleon declared himself emperor of France in 1804.
d. What did he do when he ruled France?

Ans: In France, he ruled wisely and well, and he restored law and order after the revolution. He reorganized the French government and the Bank of France. He built many fine roads and improved the old ones. He turned Paris into a beautiful city with wide streets, fine bridges, and beautiful buildings and monuments, such as the Arc de Triomphe. More important still, he improved the laws.

e. Which countries did he rule when he was the emperor?

Ans: He conquered the huge Austrian Empire and ruled Italy, Switzerland, and Germany.
f. What was the main cause of his destruction?

Ans: The main cause of his destruction was to  invade Russia.
g. How did his rule as emperor end in Europe?

Ans:  The Europeans gathered their armies to end his rule. The combined armies, led by the British Duke of Wellington, defeated Napoleon at Waterloo in 1815.
h. How could Napoleon have been an even greater ruler?

Ans: Napoleon would have an even greater ruler had he not been driven by his love of power.

Critical thinking
a. What can be the qualities of a great leader? Can a great leader remain in power for long in a country? Discuss.

Ans: Leaders are backbones of our nation. They shape, plan and execute development and other activities. They help to modify the face of our nation, communities, and organizations.

No, a great leader cant remain in power for long in a country because of one his/her one wrong decision. People start to criticize him/her for a mistake. In fact, greatness is an individual treat. It is momentum. Napoleon remained a great leader for a long time but his single mistake of invading Russia turned him into a normal person. Napoleon would have an even greater ruler had he not been driven by his love of power.

Qualities of a great leader:

b)  The 16th president of the USA, Abraham Lincoln said democracy is government of the people for the people and by the people. Do you think it is perfectly applicable in the present context of Nepal? Explain

Ans:  The 16th president of the USA, Abraham Lincoln said democracy is government of the people for the people and by the people. Nepal is a federal democratic republic. Democracy is important political  movement in developing countries like Nepal. Yes, I think it is not partially applicable in the present context of Nepal because Nepal’s democracy is in its initial stage.

Nepal has democratic system of governance.   Because of this system  people’s lives are changing day by day completely. People are given the opportunity to take part in the general election to elect the parliament which is responsible for the running of the country. This democratic system is felt in all the parts of Nepal where people’s lives are improving drastically. People are enjoying social justice.  A lot of things have been transformed for good under the democratic system. Nepal is  enjoying the fruits of democracy which include but not limited to good education, improved health, reduction in poverty levels and creation of job opportunities. So, I feel that it is partially applicable in the present context of Nepal.

Nepal’s democracy is in its growing stage. Now, it is facing   several challenges in its infant stage. Democracy is a self-learning and self-correcting system. It needs  longer exercise, commitment, dedication of leaders, peace, stability in a country and sincerity of people to get its fruit in full fledge.

Writing
a. Write an essay on Power and Politics in about 500 words.

Ans: Power is the ability of an individual to influence others. Power can influence the actions, beliefs, or conduct  of people.  Power is a process of ties between individuals and political parties. It can be defined as the capacity to influence and act as first party desires. Politics is the process of influencing the various parameters of power. It is the behavior of self-serving individuals that undermines the legitimate system of influence.

Power and politics are necessary to run an organization. An organization functions smoothly with the distribution of power. Political pressures and power struggles can be seen in  all  organizations. If we don’t follow appropriate guidelines in the use of power, there is the possibility for  individuals to abuse their influence. So, there must be a perfect balance between power and politics.

Political behavior has been a part of our culture since the beginning of time. It is believed that it is an integral part of our lives and plays a huge role in shaping our world. In today’s work environment, politics can thrive due to the various demands placed upon us as humans. Political pressing factors and force battles can be found in practically any industry and if the suitable rules in the utilization of force are not clear cut it turns out to be simple for people to mishandle their impact.

At the point when we hear the term political, we typically think about the public authority, lawmakers and ideological groups. For a nation to have a coordinated government and work according to explicit rules, we require a specific association. This is the place where legislative issues comes in, as it basically frames the public authority. Each nation, gathering and association use legislative issues to instrument different approaches to coordinate their occasions, possibilities and that’s just the beginning.

Political issues doesn’t restrict to people with significant influence in the public authority. It is additionally about the ones who are in the raced to accomplish a similar force. The up-and-comers of the resistance question the gathering on power during political discussions. They plan to advise individuals and make them mindful of their plan and what the current government is doing. This is finished with the assistance of political issues as it were.

Besides, many of politicians are bad. They misuse their ability to propel their own advantages as opposed to that of the country. We see the news overwhelmed with articles like politicians and their families including in tricks and illicit practices. The force they have causes them to feel invulnerable which is the reason they pull off any wrongdoing.

Prior to coming into power, the public authority makes various vows to general society. They impact and maneuver them toward speculation every one of their guarantees will be satisfied. In any case, when they acquire power, they betray the general population. They work for their childish intentions and continue to trick individuals in each political decision. Out of this, lone the normal endures because of lying and degenerate lawmakers.

b. Write a couple of paragraphs about a national hero who fought bravely in the Anglo-Nepal War.

Ans:  Amar Singh Thapa Chhetri was a Gorkhali and Anglo-Nepal War hero. He was the military general and governor during Anglo-Nepal War. He is still considered as a National hero of  Nepal who fought bravely to save dignity of Nepal.

He was the general officer of the Nepal Army in the victory of Western Provinces and definitive leader of Kumaon, Garhwal in the Kingdom of Nepal. He was alluded by the King of Nepal to have been conveyed as Mukhtiyar of Western Provinces of Kumaon and Garhwal. He is regularly hailed as Living Lion of Nepal. He led the war till his last drop of blood. He was  son of Bhim Sen Thapa.  Amar Singh drove numerous success clashes of Western regions in the Unification of Nepal. He was driving the victory of Langur Gadhi in Gadhwal Region before the episode of second Sino-Nepalese War.

He instructed Gorkhali powers to guard the town of Srinagar from The third division armed force under Major-General Gillespie coming from western side. His child Ranjore Singh Thapa was holding powers at Nahan, the main town of Sirmaur.

During the subsequent mission, he was filling in as area authority of Sindhuli Gadhi and eastern forward looking weighty setbacks from the attack of Colonel Kelly and Colonel O’Hollorah under Main Operational administrator David Ochterlony. His child Ranjore arrived at Sindhuli Gadhi to guard the stronghold. The British couldn’t arrive at Sindhuli Gadhi and felt back.