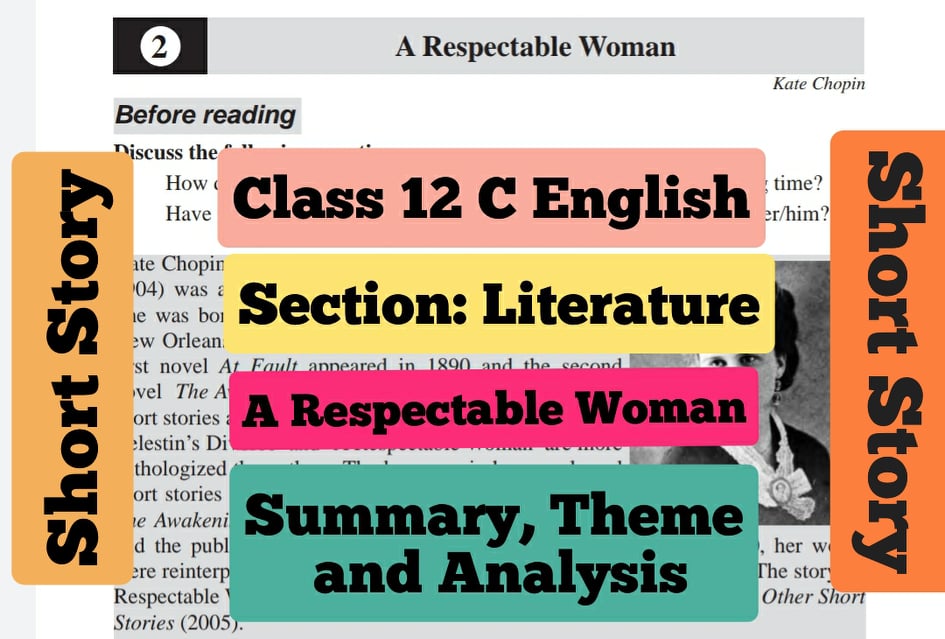 A Respectable Woman by Kate Chopin

In fact, Mrs.Baroda wasn’t happy about the visit. She wanted to spend her full time with her husband in their plantation. She hasn’t got a chance to see Gouvernail. But she had heard about him from her husband’s college stories. She had made a picture of him in her mind. She had made a negative picture about the man. She thought that he was tall, cynical and slim. At last, she was surprised by seeing him because he was nothing of what she had thought about him. He was quite opposite.

She hasn’t got a chance to see Gouvernail. But she had heard about him from her husband’s college stories. She had made a picture of him in her mind. She had made a negative picture about the man. She thought that he was tall, cynical and slim. When he arrives, she finds that he wasn’t tall and cynical. She finds him an interesting person.

Gaston had described about the positive qualities of his friend, Gouvernail. But she didn’t find all those qualities in him but she likes him. He was quiet, loveable, inoffensive and courteous fellow rather than brilliant one. Gaston describes him about his sugar planting in his plantation area. Mrs. Baroda finds him strange and mysterious. But she can’t explain her inner feeling about him.

She likes him but she doesn’t have reasons for it. He was unique.  He was not like other guests. To create a distance with him, she decides to leave the house until he leaves. One night, she was resting outside on a bench. She was thinking  about Gouvernail. She realizes that his strange behaviour is attracting her towards him. Gouvernail is making her feel so strange.

Gouvernail comes there. He brings a scarf for her. He says that it is by her husband. They remain silent after some talks. She feels that her body is attracted towards him. She resists it. She realizes that she is a respectable woman. She leaves the place without saying anything to him. In the next morning, she leaves the house before others have got up. She returns to the house after Gouvernail’s departure. She tells her husband that she has overcome her mind. Now, she can handle her guests. She will treat nicely with him.

The story highlights the inner part of human beings. We only see outer layer of mind but we are unknown about inner thinking. It presents the repressive nature of the person like the central character, Mrs.Baroda. She is a respectable woman. She has to follow the certain norms and standards of the society to maintain her husband’s status. She has inner repressed desire for Gouvernail. She likes him but she can’t express and expose it. It is forbidden in her society.