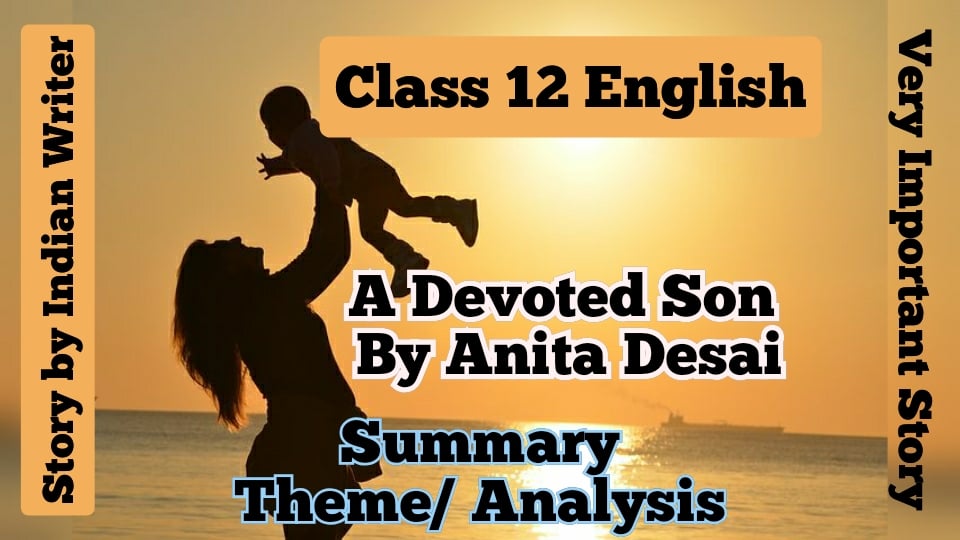 An Indian novelist, short story writer and the writer of children’s books.

Theme of the Story A Devoted Son:

‘A Devoted Son’ is a realistic short story set in a middle-class Indian family in an Indian village. The story shows how parents cherish their ambition towards their children and how a son should fulfil his duty towards the parents. The story captures the contemporary Indian urban life of that time. The central characters are known to us. We feel that we have known them in our day to day life.

Summary/Analysis of the Story A Devoted Son:

It is a short story. This story highlights complicated bonds of a family. It also captures dynamical change between father and son relationship. The whole story moves around the Verma family and its crisis. The central character Rakesh is from a poor background. His father is a poor Indian villager. His father, Verma, is a vegetable vendor. He wants to see change in his family. His dream comes true when his son becomes a reputed doctor of the town. His son is the first person to get proper education in his whole family.

Varma and his wife are uneducated but they are hard working person. They work day and night to fulfil all the necessities of their son,Rakesh. Rakesh is well mannered son. He follows his father’s path by being disciplined and ideal. He follows and understands culture, value and compassion of his family.

His father has taught him about the value of culture and compassion. So, he strongly accepts his father’s steps. He is a brilliant student in his school. He completes his doctor’s study. He has completed his post graduation. He gets a chance to continue his education in America. His mother brings his marriage proposal to an illiterate village girl. He returns to India and marries the girl.

He starts doing job in the town hospital. He becomes the head of the hospital. He also opens his own private clinic. All his colleagues, parents and neighbours celebrate his success.  A crisis enters his family when his mother becomes ill.

She dies due to her illness. But the circle of crisis continues. His father also becomes ill. Now, Rakesh wants to handle his father with his personal care and love. He doesn’t want to loose his beloved father like his mother. He makes his father’s diet chart and daily routine for his quick recovery.

He doesn’t allow his father to eat sweets and oily foods. He only gives healthy foods. His son’s the decision makes his father unhappy. His father wanted to enjoy all foods. He doesn’t like his son’s controlling behaviour. Rakesh gives different medicines to his father to cure his illness.

Mr.Verma complains about his son’s controlling habit to his friends. Verma takes the help of Rakesh’s son to eat sweets. Rakesh knows that his father is misusing his grand kids to eat forbidden foods. The crisis comes to the end.

One day, Rakesh brings a bottle of medicine to his father. His father throws the bottle on the ground. It smashes on the floor. Verma scolds his son and requests his son to allow him to enjoy his remaining days in peace.