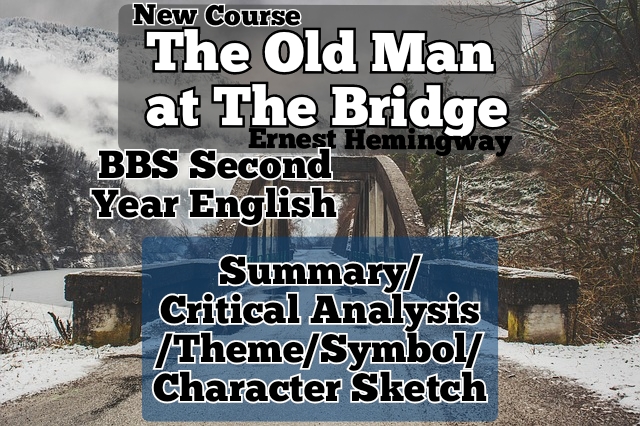 Old Man at the Bridge by Ernest Hemingway

It is a story written by the Nobel Prize winner  American writer Ernest Hemingway. The story presents a conversation between two characters. The story is presented through the first person narrative of a soldier. We only know his gentle behaviour. We don’t know his full background. They are a soldier and an old man. The narrator is a soldier.

We find the use of ordinary details in an interesting way to capture the crisis caused by war. The old man symbolizes a civilian who is the victim of war. The old man is forced to leave his home when Spanish Civil War starts. The war brings destruction, suffering, anxiety and pain in the civilians. The old man seems exhausted because of the war.

He was 76 years old. He had travelled 12 kilometers journey to reach there. He is sitting by the side of a bridge(pontoon). He is by the side of a road. The soldier starts talking with him. The old man had left his home. He didn’t have a family.He used to live alone.  He was thinking about his animals. He was more worried about his animals especially about goats and pigeons. He had two goats, a cat and eight pigeons.

At the end of the story, the soldiers failed to solve the concern about the safety of the animals. He couldn’t do anything to save them. In this way, the story captures the dark sides of a civil war. It tries to capture different facets of the civil war of spain. It brings the theme of depression, suffering, miseries and pain caused by the war. It becomes able to capture physical as well as

Old Man at the Bridge Theme

The story ‘Old Man at the Bridge’ presents the themes of depression, suffering, pain and isolation caused by the war. It also highlights the theme of  forthcoming death. We come to know the theme through the conversation between two characters.

The old man is homeless. He was forced to leave his homeland due to the Spanish Civil War. He was one of the victim of the war. He was suffering from pain and anxiety after leaving his beloved animals. He was 76 years old but he had travelled 12 km long journey to follow his destination. He was tired to continue his journey to reach a proper safe place.

If Fascists reach to the bridge then he may lose his life. The old man death is following him. The narrator advised him to leave the place. But he was more concerned about his animals than his own life.

Character Analysis in the story Old Man at the Bridge

How to Write Press Release ? With an Example: Business Communication: BBS Second Note

What is a press release? Write its importance and basic elements: Business Communication: BBS Second

Write an actual letter of complaint to a hotel, a restaurant, a business, a government agency, or an educational instituion. Explain why you are unsatisfied with the product or service that has been provided and ask for a fair resolution to the problem: BBS Second English: Business Communication