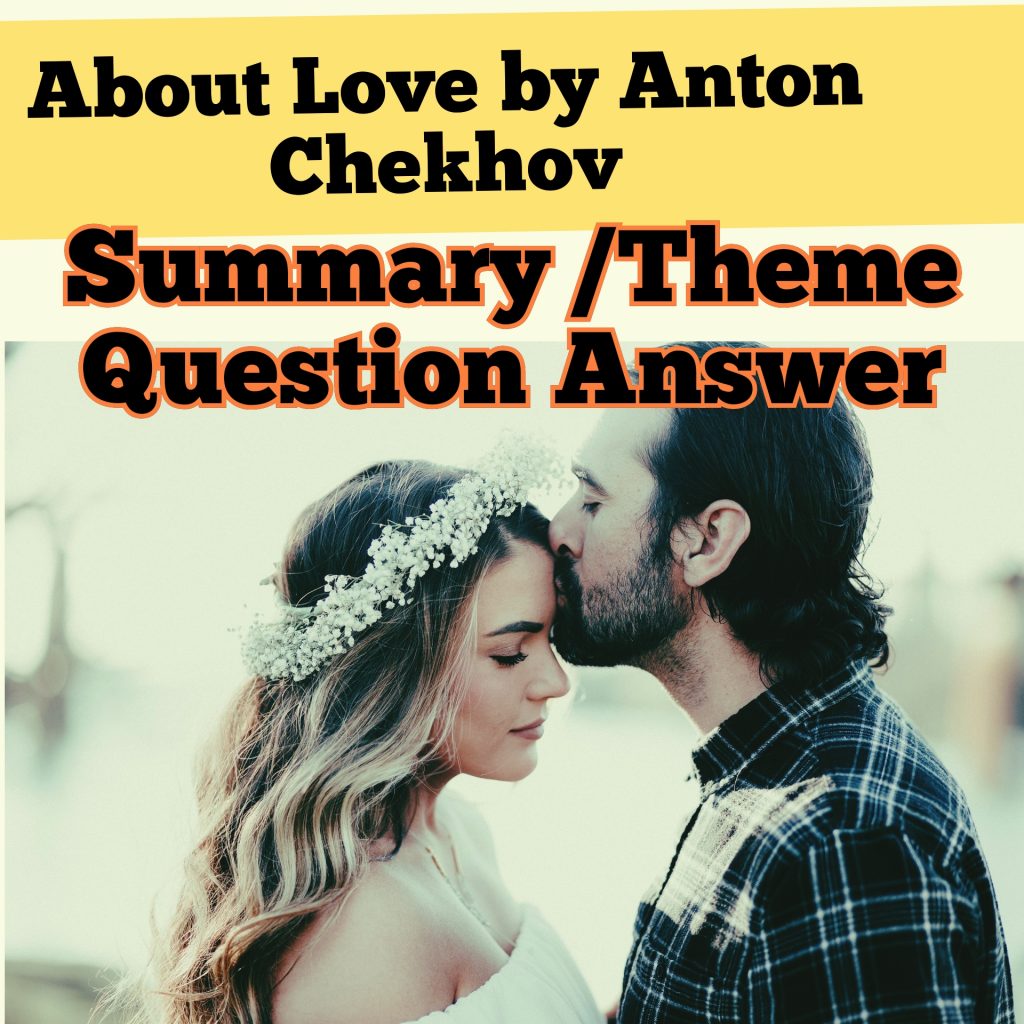 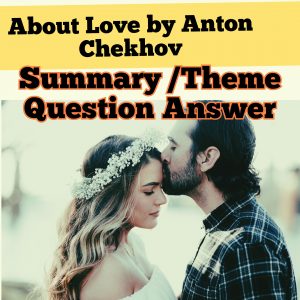 “About Love” tries to define love through the love story of the main character, Alyohin. Alyohin was living in the village with his servants. Two of them, Nikanor and Pelageya, loved each other. But Pelageya didn’t want to marry Nikanor because of his violent nature. She was ready to live with him, though. However, Nikanor did not want to live together without marriage. This reminds Alyohin of his own unfulfilled love.

He was the son of a farmer. His father had spent a lot of money on his education by mortgaging the land. After graduating from university, he worked in the farm to pay the debt. He had been elected honorary justice for peace years ago. This gave him a chance to go to the town sometimes to participate in court sessions. On one of such visits, he was invited to dinner by a friend Luganovich. Alyohin became attracted to his young and beautiful wife, Anna. He became like a family member and frequently visited them. He and Anna spent much time together talking and going to the theatre. They liked the company of each other and had fallen in love, but they would not express it. They hid their feelings fearing that they would ruin each other’s lives. Because of unexpressed feelings, Anna became depressed and kind of sick and had to go to another place for treatment. Many people came to say her goodbye. As the train started to move, Alyohin ran to Anna with her basket which she had forgotten. This time they couldn’t help falling in each other’s arms. They expressed their love. But they had to part forever. Sadly, Alyohin returned to his farm.

2 What is the definition of love according to Alyohin?

OR, How did Alyohin define love?

According to Alyohin, there is no exact and fixed definition of love. He says love is strange and mysterious. Whatever we have read and heard about love can’t solve the problem of love. Based on his own love affair, he suggests that love is not bound by marital relation. It is true and spiritual. Happiness, unhappiness, morality, sin, virtue, social status, class, prestige etc. have nothing to do with love. If we love we should simply love without reasoning. If we start reasoning about love, it becomes a source of dissatisfaction and irritation.

3 What kinds of love experiences are suggested in the story?

Alyohin talks about three types of love experiences: two of his own and one of his servants. While a student, he lived with a girl and also had physical relation. In return of love, the girl expected money or other gifts from him. The love of Nikanor and Pelageya is a common love between a man and women that needs marriage for legality. The love of Alyohin and Anna is of higher level. It goes beyond all limitations. Bodily pleasures are not important. Only feelings are counted. It is spiritual/platonic love.

4 “About Love” gives a brief account of a violent love affair between two servants. How does the anecdote contrast with Alyohin’s own story?

There is an account of a violent love affair between two servants in Alyohin’s house: Nikanor and Pelageya. This contrasts with Alyohin’s own affair with Anna. In the Nikanor-Pelageya love story, both belong to socially inferior class. But Anna and Alyohin belong to socially superior and cultivated class. The love between the first couple is an ordinary love between a man and women that needs marriage to legalize the relation. The love between Anna and Alyohin is of higher level, an unusual love. It goes beyond social limitation and matrimonial bonds.

5 Alyohin is said to rush around like a squirrel in a cage and this judgement is echoed in the final paragraph of the story. What is the significance of this repetition?

Alyohin is described as a squirrel rushing around in a cage first by Luganovich family and later by his friends. This is very significant. Squirrel is a free animal. It is a symbol of activity and creativity. Being a university graduate with a knowledge of languages, Alyohin is an intellectual person and has a great scope in life. But instead of getting involved in scholarly activities, he lives a simple and hard life of a farmer. He is limited within his estate and village like a squirrel kept in a cage. As he tells his story to his friends, they are impressed by his intelligence and story-telling skill. But his lonely and limited life makes them feel sorry for him. He should have been a great artist or writer instead of a poor farmer.

6 Do you agree with Alyohin that “celebrated” people lead more fulfilled lives than the rest of us?

We cannot accept Alyohin’s assumption that only ‘celebrated’ people lead more fulfilled lives. He says his life would have been interesting and beautiful if he were a freedom fighter, a famous scholar, actor or painter. In that case, he could have dared to take Anna with him. But given his situation as a poor farmer, he thinks he will spoil her life. He does not seem to realize that each human attempt becomes heroic if it is full of virtue and goodness. Greatness is not in the post but in the act. Being famous and celebrated does not necessarily lead to a happy and fulfilled life. As opposed to Alyohin’s assumption, so-called ‘celebrated’ people like heroes, or actors might be unhappier because society often expects from them more than they could give.

7 Why did Chekhov choose to write about an ordinary man instead of a hero, a scholar or an actor?

Chekhov chose to write about an ordinary man instead of a hero, or a scholar, or an actor in order to give a real picture of his society and present general human nature. Alyohin represents the common Russians. Like them, he lives an unhappy life. If he was a celebrated personality like a hero, a scholar or an actor, he may not really represent his society. Moreover, a hero, a scholar or an actor is a man first. Feelings of love, hatred, anger, happiness and grief are common in celebrated personalities and ordinary men. Therefore, Chekhov writes about an ordinary man.

8 Sketch the character of Anna.

Anna is the main female character in the story. She is young, beautiful, kind, educated and intelligent. When Alyohin meets her for the first time, she is only 22 and has a six-months old baby. Her beauty, caring nature and like-minded attitude bring him close to her. Both love each other. But she is also practical. She thinks about the troubles she would cause for Alyohin and for her family if she surrenders to her feelings. But her unexpressed love and unfulfilled desires make her mentally disturbed and she needs treatment.

9 Sketch the character of Alyohin.

Alyohin is the protagonist in the story “About Love”. He is a university graduate but is working as a farmer. Like common Russians, he lives an unhappy life. He is compared to a caged squirrel which rushes around the cage. Alyohin is limited within his estate and village. After his tragic love with Anna, he is shut in his memory. Alyohin could not come out of his poor economic condition although he works hard. He is also compared to a village cat forced by hunger to eat cucumbers in the kitchen garden. He does not have a respectable and well-paying job in spite of being a university graduate. Because his estate is mortgaged, he is forced to work hard like a poor farmer although he dislikes it.

In other people’s eyes Alyohin is a nice and gentle person. Because of his visits and good behaviour, he becomes like a family member in the Luganoviches’ house. His friends admire his intellectuality and story-telling skill. But he becomes a lovelorn bachelor.

10 Do you consider Alyohin a successful or a failure person?

We cannot say that Alyohin is a successful person. Though a university graduate, intellectual and scholar, he does not have a good career. He works hard in his farms. Yet he is penniless. He has a limited scope in life. He is described as a squirrel rushing around in a cage. Similar is his love life. He is still a bachelor. He has not found a good match. The only woman he truly loved was Anna. But he could not get her because she was another’s wife. He leads a lonely and unhappy life because of his failure in love relation.

11 How does an account of the occasion and of the setting/atmosphere in which the narrative occurs affect our understanding of Alyohin?

OR, What is the connection between the atmosphere and Alyohin’s behaviour with the woman he loves, and the outcome of the story?

The story starts with an occasion: Alyohin and his friends are having a leisure time. It creates an atmosphere of inertia. They are eating, drinking and talking. Alyohin starts talking about the love affair between Nikanor and Pelageya. This topic about love leads to the telling of Alyohin’s own love story. As he begins, the sky is grey and the environment is gloomy. This is symbolic of Alyohin carrying a sad memory of his love affair. As he ends his story, the rain stops and sun shines. This suggests the release of a heavy load from his heart. The gloomy atmosphere suggests that he has got life-long grief and misery as the result of his failed love with Anna.

Post Views: 1,702
“About Love” gives a brief account of a violent love affair between two servants. How does the anecdote contrast with Alyohin’s own story? 10 Do you consider Alyohin a successful or a failure person? 2 What is the definition of love according to Alyohin? OR 3 What kinds of love experiences are suggested in the story? 6 Do you agree with Alyohin that “celebrated” people lead more fulfilled lives than the rest of us? 7 Why did Chekhov choose to write about an ordinary man instead of a hero a scholar or an actor? About Love Anton Chekhov About Love Anton Chekhov 1 Give/write the summary/story of “About Love”. about love question answers about love summary about love theme Alyohin is said to rush around like a squirrel in a cage and this judgement is echoed in the final paragraph of the story. What is the significance of this repetition? and the outcome of the story? Class 12 Compulsory English Heritage of Words About Love Anton Chekhov Give/write the summary/story of “About Love”. How did Alyohin define love? How does an account of the occasion and of the setting/atmosphere in which the narrative occurs affect our understanding of Alyohin? OR Sketch the character of Alyohin. Sketch the character of Anna. What is the connection between the atmosphere and Alyohin’s behaviour with the woman he loves
Share. Facebook Twitter Pinterest LinkedIn Tumblr Email