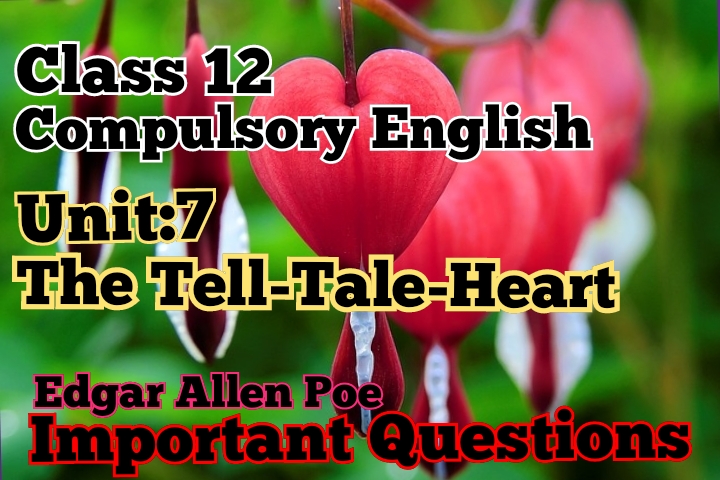 1 Justify the title “The Tell-Tale Heart”.

The meaning of the title “The Tell-Tale Heart” is the heart that reveals a secret of the person himself. The narrator of the story is mentally ill and kills an old man. But his own heart betrays him. He cleverly plans the murder. He hides the dead body and leaves no sign of murder. He is very careful while talking with the police officers who come to investigate. But the heart knows he has done wrong. He starts hearing a sound that grows louder every moment. He cannot tolerate the sound and confesses his crime. Thus, the title is suitable because his own heart reveals his secret.

2 Describe the nature of the murderer.

OR, Do you think the narrator is mad? Give reasons.

The narrator is not mad but is suffering from a kind of mental illness. He is actually a psycho. His cleverness and good memory prove that he is not mad. But his activities are like a mad person’s. He claims he has an acute sense of hearing and can hear everything of heaven, hell and earth. He kills the old man only because he hates the man’s eye. He then cuts the body into pieces and hides them. But he begins to hear a sound that grows louder every moment. He takes the sound of the old man’s watch as the sound of the man’s heartbeat. He gets so irritated that he cannot tolerate this and confesses his crime.

The narrator is very clever although he appears mad. He plans the murder carefully and cleverly. He goes to the old man’s room at night with a lantern. Then he angles its light in a way that he can see the man’s eye and kill him. He leaves no proof of the murder. When police officers come there, he behaves politely and in a friendly way. He is able to hide his fear of getting caught. He talks with a smile and answers their questions carefully. But his own heart betrays him.

3 Why does the narrator develop intense hatred against the old man?

OR, Why does the narrator kill the man?

The narrator develops an intense hatred against the old man and kills him. And the only reason is the old man’s blue eye. He calls it a vulture’s eye and Evil Eye. It has taken away his peace of mind. He feels a kind of odd irritation and his blood runs cold whenever the old man looks at him. He kills the old man to get rid of the eye forever. He kills an innocent old man because he is kind of mad.

4 How does the narrator feel after the murder?

OR, How was the narrator betrayed by his own heart?

OR, What made the narrator confess his guilt/crime?

After the murder the narrator hears a sound that grows louder every moment and forces him to confess his crime. It is the tick-tick sound coming from the old man’s watch. But he mistakes it for the man’s heartbeat. He talks loudly to kill the sound but it grows louder. He is irritated. He thinks the police officers have heard the sound and know the secret. The sound becomes intolerable and he confesses saying that he has killed the old man and hidden the dead body under the wooden floor.

5 Describe the situation and the sound which incited the narrator to commit crime at first and to confess it at the end of the story.

The old man’s eye and terrified heartbeat incited the narrator to kill him. He calls it a vulture’s eye and Evil Eye. He always felt a kind of odd irritation and his blood ran cold whenever the old man looked at him. Therefore, he decided to kill the man to get rid of the eye forever. He went to the man’s room at nights with a lantern. He angled its light on the man’s eyes. One night the old man woke up and the narrator saw his eye. Moreover, he felt the man’s heartbeat caused by his fear. It increased his irritation and hatred and forced him to kill the man.

At the end of the story the narrator got irritated by a sound and confessed his crime. First he talked politely the police officers who came to investigate. He was confident that they could not know his secret. But he started hearing the tick-tick sound coming from the old man’s watch. He took it as the man’s heartbeat. He talked loudly to kill the sound but it grew louder. He was irritated. He thought the police officers knew the secret. The sound became intolerable and he confessed his crime.

6 Describe the scene when the narrator killed the old man.

The narrator secretly came to the old man’s room at night to kill him. He brought a lantern. He angled its light on the man’s eyes which he hated so much. He mistakenly made a sound and the man woke up. The narrator kept quiet and waited for an hour. He again angled the light on the man’s eyes and saw they were open. The old man was frightened and his heart was beating very fast. The narrator heard this heartbeat and felt it growing louder. The eye and heartbeat increased his hatred and irritation. He attacked the man, dragged him to the floor and killed him by pulling the bed over him.