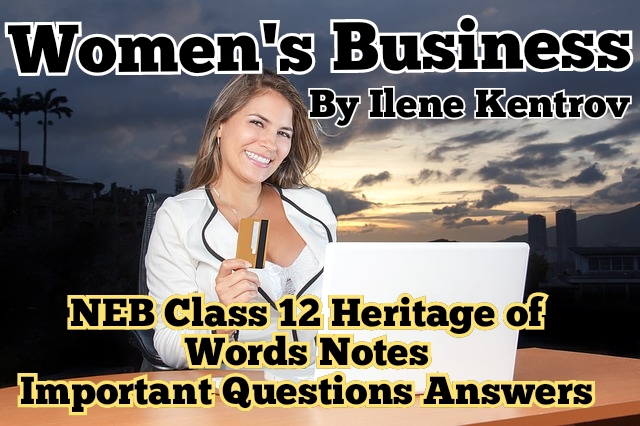 1 What is the thesis/theme/main idea of the essay?

The thesis/theme of the essay is that women can also run business and succeed like men. The writer describes how women in America started and flourished business. The businesswomen mentioned in the essay adopted new business strategies to become successful. They also combined business with social service. They earned not only money but also respectable position in the society. The essay supports women’s equal rights and their social and economic reform.

The businesswomen/female entrepreneurs differed in many ways from their male counterparts. They used their image to advertise their products, which the males did not do. Unlike the males, they combined business with social service and offered more than products. They also promoted women’s rights and reforms and advised women about diet, exercise and health. They highlighted local products and used traditional women’s skills. But they mostly offered their service to the women.

The businesswomen resembled their male counterparts in the matters of advertising and attitudes. They sold their products well by adopting clever marketing techniques, hired marketing agnts and spent much on advertisements. They also used misleading advertisements. They did not hesitate to go to the court of law like businessmen. But neither the males nor the females broke the law of the state.

3 Which of Lydia Pinkahm’s business methods did later women capitalists adopt for their own enterprise? How did they differ from her model?

Later women capitalists adopted Lydia’s advertising methods for their own enterprise. Like Lydia, they used their images for advertising and offered more than products. They also promoted social and economic reforms. They contributed to hospitals, schools and cultural organizations. Like Lydia, they introduced local matter, used traditional methods and offered their service mostly to the women.

Unlike Lydia, later women turned their attention to other sectors like cosmetics, facial treatments, child care, hairstyling, hotel and spa. Their strategies also differed from Lydia’s. Some showed glamorous images by marrying rich Europeans. Many used false advertisements and spent too much on them.

4 Why did Lydia Pinkham first begin to sell her products?

Lydia Pinkham first began to sell her products to support the family because her husband’s real estate business collapsed. She had collected folk remedies for her family for years. She could use her traditional woman’s skill in marketing her medicines to cure female diseases. Another reason behind selling her home-made products was to show that women can also run business and succeed like men.

5 How did the women start and flourish their business in America?

The women started their business with home-made products and traditional women’s skills. Pinkahm was one of the first to do so. She produced a medicine to cure falling of womb and other female weaknesses and diseases. Another made a type of bread for her son to cure his asthma. Later she extended this product to other people suffering from asthma.

The businesswomen adopted a clever way to flourish their business. They combined business with social service and offered more than products. They advised women about diet, exercise and health. They promoted women’s rights and reforms. They used their image to advertise their products in newspapers. They even advised women to prefer female over male physicians.

6 Why is Lydia Pinkham most notable character in the essay?

Lydia Pinkham is most notable for starting women’s business which then flourished. She started her business with home-made products and traditional women’s skills. She produced a medicine to cure women’s diseases. She adopted clever ways to advertise her products. She combined business with social service and offered more than products. She promoted women’s rights and reforms and advised women about diet, exercise and health. Her success led other women to follow her example.

7 How would you expect a militant feminist to react to this essay?

A militant feminist would support this essay because it praises the success of women in business. She would react positively to these women’s work for women’s rights and economic reform. She would equally support the women’s advice on diet, exercise and health. She would praise the activities of Pinkham and other women for improving women’s social status. They competed with their male counterparts. A feminist would surely praise and support these activities of the women in this essay.

8 Are any of the writer’s general statements debatable?

Some of the writer’s statements seem to be debatable. Lydia Pinkham suggests her women customers not to go to the male physicians. A feminist wouldn’t support this idea. She wouldn’t support the attitudes of some businesswomen who attracted women to use cosmetics in the hope of marrying rich Europeans. It is not a good idea to limit women’s business within their race. The businesswomen should focus on the equality of men and women.