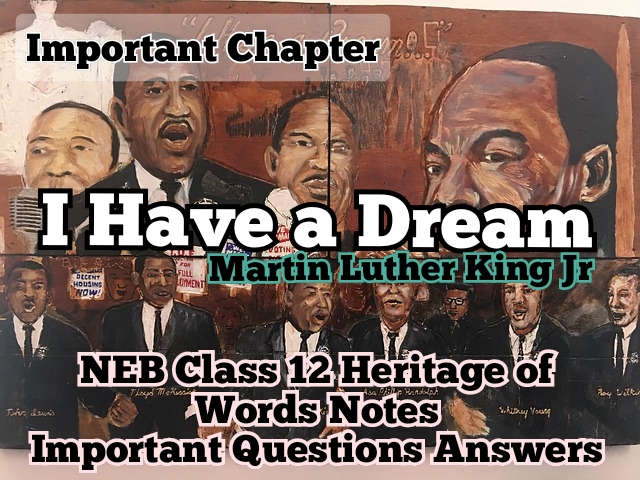 I Have a Dream

1 What is Martin Luther King’s dream about the future of America?

OR, Discuss Martin Luther King’s speech as a plea for equality and freedom.

Martin Luther King’s speech is a plea for equality and freedom. He presents this plea in the form of a dream which must come true. King’s dream is deeply rooted in the American dream of life, liberty and pursuit of happiness. It is the dream of future America which is free of racial discrimination and full of equality and where every citizen is judged by their character and not by their skin colour. It is the dream of the end of prejudice, injustice, inequalities, hatred and segregation. It is the dream of peace, brotherhood and integration. He wants to see black and white children playing together and black and white people walking together joining hands as brothers and sisters.

Martin Luther’s dream is the dream promised by historical documents like Lincoln’s Emancipation Proclamation and American Constitution. These have guaranteed equal rights of life, liberty and pursuit of happiness to all people born American. But words and promises remained in papers for the Blacks. His dream is about putting these promises into practice. It is the dream of equal rights, opportunities and freedom for all, no matter black or white.

2 How is King going to achieve his dream?

OR, How does Martin Luther King want to over the sad picture of coloured people in America?

King is going to achieve his dream of equality and justice by raising a strong voice and through peaceful, nonviolent protest. He is leading the Black civil rights movement. He suggests his fellow Blacks to keep struggling until there are equal rights and opportunities for them. But he discourages violence. This will not end bitterness and hatred but rather increase such feelings. They should follow Mahatma Gandhi’s path and philosophy of nonviolence. If they keep on struggling in a disciplined, civilized way, they are sure to achieve this dream sooner or later. Only they should not give up.

3What is Martin Luther complaining about?

OR, Martin Luther King exposes a sad picture of coloured people in America. What does this sad picture refer to?

4 What is the apparent purpose of Martin Luther King’s speech?

The apparent purpose of King’s speech is to demand equal rights, opportunities, justice and freedom for the black people. It is an appeal for equal treatment. He talks about the need to end social prejudice, segregation and racial discrimination. Although promised in the American constitution and by Lincoln’s Emancipation Proclamation, black people have been deprived of enjoying equal rights. He wants the promises made in papers to be put into practice.

5 To what extent does King’s personal authority lend power to his words/ voice?

King’s personal authority plays a great role to lend power to his words. He has worked as a pastor in a church and has always stressed the need of tolerance and brotherhood for a civilized, prosperous society. While at college, he had shown public-speaking abilities. He has organized many nonviolent protests. His criticism of segregation and racial discrimination in the past years has convinced many white Americans to support Black civil rights movement. Now as the leader of this movement, he is giving this speech at the end of a peaceful rally of 200,000 people, including many Whites.

King makes an analogy between false promises and a bad cheque. If there is insufficient amount in the bank, the cheque of higher amount is returned. It is called a bad check. Here bad check means false, unfulfilled promises of equal rights, opportunities and freedom. America has failed to pay her black citizens. In spite of the guarantee of equality for all, black Americans are returned with empty hands from the bank of justice. This is the meaning of the analogy of bad cheque.

7 Why was Martin Luther King’s speech so popular?

OR, What is the historical significance of Martin Luther King’s speech?

Martin Luther King’s speech was popular because he raised the universal issue of human rights. He not only gave the speech but also led a peaceful rally and protest against the injustice, inequality and discrimination done to Blacks in America. His speech represented the hopes and dreams of all black Americans. In a strong voice he put forward black Americans’ demand for equal rights, opportunities, justice and freedom. This made him and his speech popular.