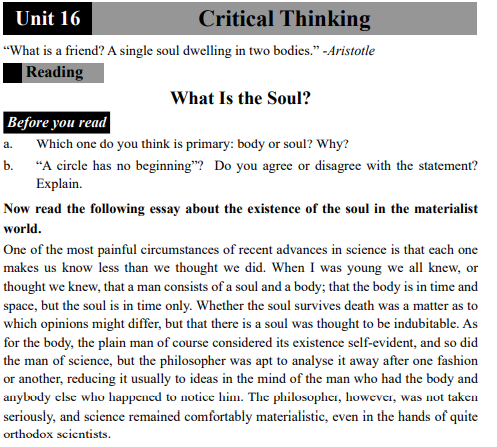 What Is the Soul? 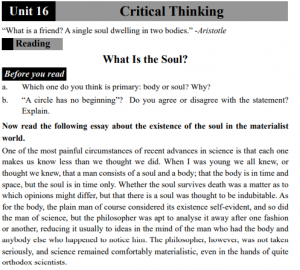 Ways with words
A. The words in the crossword puzzle are from the text. Find them from the text to solve the puzzle based on the meaning clues given below.

Across Down
3. emergence or origination

2. never done or known before- Unprecedented
7. appropriate or suitable- Apt

4. obviously or clearly-Evidently
8. force back- Repel

6. moved with a violent, irregular action-Agitated
10. up to now- Hitherto

a. What’s the difference between the body and the soul?

Ans: The body is in time and space, but the soul is in time only.
b. What do you understand by the psychologists’ saying that there is no sucht hing as mind?

Ans: What we can say, on the basis of physics itself, is that what we have hitherto called our body is really an elaborate scientific construction not corresponding to any physical reality. The modern would-be materialist thus finds himself in a curious position, for, while he may with a certain degree of success reduce the activities of the mind to those of the body.
d. How are mind and body related?

Ans: Mind is an emanation of body, and body is an invention of mind.
e. What is the relation between mind and memory? Does memory survive a
person’s death?

The most essential characteristic of mind is memory, and there is no reason whatever to suppose that the memory associated with a given person survives that person’s death. Indeed there is every reason to think the opposite, for memory is clearly connected with
a certain kind of brain structure, and since this structure decays at death, there is every reason to suppose that memory also must cease.
f. How is our power on the earth’s surface entirely dependent upon the sun?

Ans:  Our power on the earth’s surface entirely dependent upon the sun because we could hardly realize any of our wishes if the sun grew cold.

Critical thinking
a. Do you believe that soul really exists? Write your arguments in support of your answer.

Ans:    Yes, I believe that soul really exists. All over the world people hold strong faith in a divinity. This faith lies at the root of almost all established religions of our world. Numerous individuals have looked for an association with a higher or otherworldly force, and the followers of all creeds believe that this force, generally personified as the Supreme Being in the human image, has spread the word about itself through the interior profound or mysterious consciousness of some extraordinary messengers.

Common people give it the name God, and many philosophers call it the Cosmic Soul, from which all individual souls emerge. The truth about the spirit is among the main inquiries of life. Despite the fact that religions talk endlessly about its reality, there is also a large number of skeptics and agnostics who ask whether spirits really exist.

In my opinion, soul really exists because it keeps reminding us about our goals in life. When we go to sleep, we often have dreams, which we like to share with others. Speaking logically, if we are deep in sleep, then we cannot consciously know what happens there. And the question arises who then remembers what has happened in that dream. Surely, there must be some consciousness working at a higher level, beyond both conscious and unconscious states of mind. It means that our soul is awake whether we are asleep or awake.

Thus, we can conclude that our soul is permanent while our body is temporary. That is why religions believe that the soul departs after the death of a living body, becoming one with the Cosmic Soul – only to return in a new body. This eternal energy is our guardian, which guides us till our last breath.

To balance our life, there should be a balance between your body and mind. It means that if you want to change your body, you first have to change your mind. It indicates the importance of mental health.

The normal grown-up considers 60,000 contemplations each day. It is our musings that lead to our activities. We can be completely changed or adjusted by recharging our perspectives . To recharge our psyches we should zero in on that which is acceptable and unadulterated and empty those things into our brains until that which involved it already is weakened and in the end supplanted with the new. Whatever we center around gets greater.

Actually like our bodies, our psyches require exercise and rest just as sustenance to develop and look after wellness. Mental sustenance is the food you feed your psyche. When you get up toward the beginning of the day, start taking care of your psyche with positive extraordinary data. Data took care of to the psyche inside 15 minutes of enlivening is processed rapidly and proficiently.

Writing
Write critically on the given topics.
a. The existence of God

In the huge investigation of reasoning, a specific inquiry has perplexed even the most clever personalities. This inquiry is, “Does God exist?” Philosophers have thought about the response to this inquiry for quite a long time, each concocting their own contention and purposes for their reasoning. A foundation of discussion frequently utilized is Antony Flew’s story of the two adventurers, who discover a nursery so wonderful, that one of the pioneers is positive that there should be a landscaper watching out for it, regardless of whether he can’t be identified in any capacity. The other adventurer isn’t so effortlessly persuaded that a grounds-keeper exists by any means. This is a similarity for the theists, who put stock in God with no confirmation, and the agnostics, who can’t be persuaded of God’s presence on the grounds that there is no unmistakable.

One viewpoint comes from Sigmund Freud who accepted religion was set up due to the human need to have a sense of safety.  On the off chance that the skeptic utilized this viewpoint when reacting to the theist, his perspective would reflect this. He would ask the his kindred pioneer for what reason he has a sense of safety when he can pin the presence of the lovely nursery on the landscaper, rather than simply tolerating that the normal nursery is simply excellent. Another point of view that the skeptic voyager may utilize comes from Richard Dawkins who assembled his speculations from Charles Darwin and his hypothesis of normal choice. Dawkins dismisses any hypothesis that has God as a maker since he trusts Darwin’s speculations of development which has no requirement for God to exist.

b. Religion influences ethics and morality

Religion, ethics and morality go together. Religion and ethical quality are firmly associated with one another. What is acceptable is additionally willed by God. The satisfaction of God’s will and the exhibition of good activity, thusly, are two parts of a similar cycle. Both profound quality and religion are interior and worried about a higher law which remains far beyond the circle of the state and outside state control.

Ethical quality readies the route for the propagation of strict convictions while religion builds up ethical quality with its extraordinary authorizations. Sure of the ethical fundamentals are clarified as having an extraordinary beginning. Salvation and blessedness are deciphered as far as the person’s connection to the ethical beliefs.

Virtues showed up at by man over the span of living are appropriated by and consolidated into religion. In joining these qualities, religion fortifies and returns them to individuals in a refined and solidified structure. The conviction that they came from God gave them more prominent restricting force.