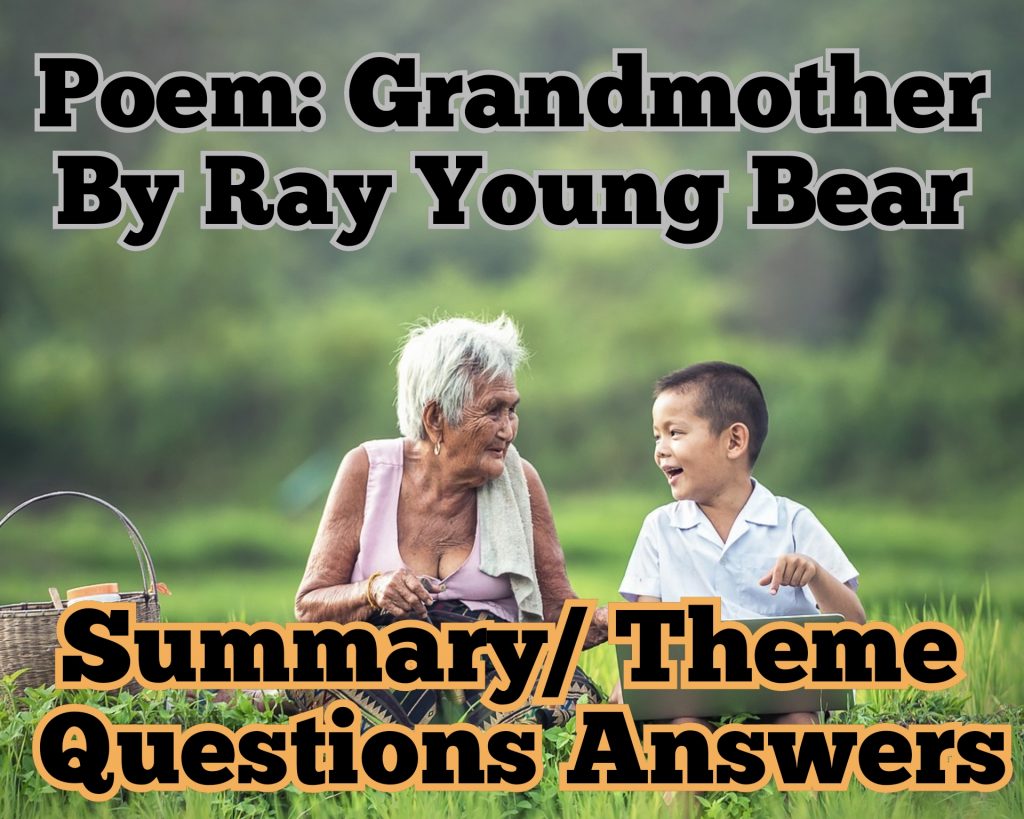 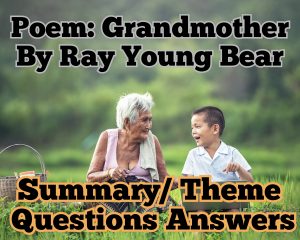 1 Write a summary of the poem.

The American-Indian poet presents reminiscences of his grandmother. He draws her picture as a loving and inspiring person with the help of images. The memory of his grandmother takes him back to his childhood. He remembers her wearing a purple scarf and coming back from the market with a plastic shopping bag in her hand. Because of this typical appearance, he could recognize her even from a distance. When she came home after working in the fields, she would put her hands on his head. He would feel the warmth of love and the familiar smell of roots. Even before looking at the face, he would be sure it was his grandmother. Sometimes the poet goes to her grave. Seeing her name on the tombstone, he imagines hearing her voice. He feels her words flowing inside him. Her words are like light in the dark, light that comes from a sleeping fire at night when someone stirs the ashes.

2 Interpret the poem Grandmother in any way you like.

The poem can be interpreted in two ways. First, it expresses the poet’s love and respect for his grandmother. Second, she represents the American Indian tribe, to which the poet belongs.

The poem suggests the poet’s intimate relation with his grandmother. He draws a realistic picture of his loving and inspiring grandmother. He remembers her shape, dress, movement, voice and activities. He knew her so well that he could recognize her even from miles away. He could even recognize her with close eyes. He could instantly know that it would be her if he heard her voice or felt her hands. Remembering her words, he feels inspired and finds some hope in his sad life.

The poem also explores an American Indian’s search for identity. The grandmother becomes a figure representing the difficulties of her tribe. They face great challenges to sustain their lives. They are marginalized, dominated and discriminated by the majority of white Americans. In spite of this, the tribe is struggling for its existence in its native land, trying to sustain its cultural values. The phrase “a voice coming from a rock” suggests the oldest times when there were only native tribes in America. The dead grandmother is a symbol of the loss of native cultural identity.

3 What are the four things the poet remembers about his grandmother?

The four things the poet remembers about his grandmother are her “plastic shopping bag”, “purple scarf”, “warm and damp hands” and “voice coming from the rock”. Though his grandmother is no more with him, her image with the purple scarf and the plastic shopping bag is clear in his memory. He can still feel her touch on his head with her warm and damp hands full of the smell of roots. Not only this, he also remembers her sweet and loving voice when he visits her grave.

4 How does the speaker feel towards his grandmother? How does he make his feeling clear?

OR, Describe the feeling of Ray Young Bear towards his grandmother in the poem.

Ray Young Bear shows affectionate and respectful feelings towards his grandmother. She was the source of love and inspiration to him. He expresses his attachment and intimacy with her by using images. He could easily recognize her from a mile away from her shape, scarf and shopping bag. She would put her warm and root-smelling hands on his head. As he remembers her voice, her words flow inside him and guide him like the light of fire does at night. He misses her a lot.

5 What are images used by the poet that appeal our different senses?