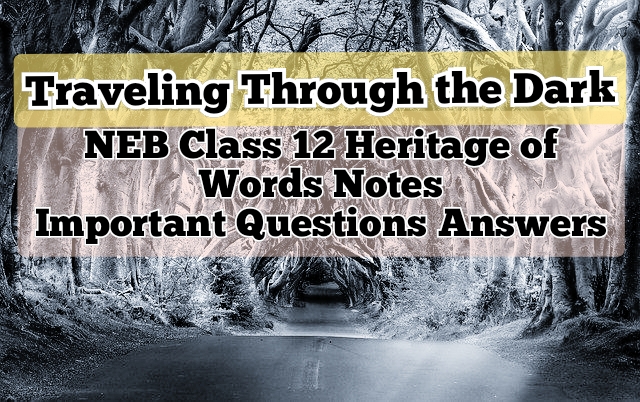 Travelling Through the Dark

The poem has five interrelated stanzas. In the first stanza, the poet finds a dead deer on the narrow road along a river. In the second stanza, he observes the stiff, cold deer and considers dragging it off. The third stanza shows the poet’s concern for the living young inside the deer as feels sorry for it. The fourth stanza describes the sound and light of the car in that lonely dark place. In the last stanza, he makes the decision to remove the dead deer.

2 Show how the action develops in the poem Travelling Through the Dark ?

The poem shows the problem of choice between responsibilities and emotions. The poet shows both. When he sees a dead deer on a narrow road, he feels it his duty to drag the deer off to prevent pollution and accidents. But he also feels sorry for the alive but unborn young inside the deer. First, he hesitates to push the deer aside. Finally, he does what he thinks is better. He can do nothing for the young, but he can do something for those who are living. He decides to remove the deer to clear the road.

3 Does the poem/poet moralize Travelling Through the Dark ?

The poet moralizes as he solves a moral problem of choice. He shows his noble feelings for the never-to-be-born young inside the dead deer. He hesitates to drag the deer off the road because the young inside is still alive. But he also fulfills his duty. He knows the dead deer on that narrow road can cause accidents and pollute the environment. He removes it to prevent pollution and accidents.

4 Do you think the reference to the alive but never-to-be-born fawn sentimental Travelling Through the Dark ?

The reference to the alive but never-to-be-born fawn is really sentimental. The poet thinks about the fawn’s future. The deer has died, but the fawn is still alive. It means the fawn will not be able to come out. If the deer had died after giving birth to the fawn, it might have survived anyhow. The poet feels very helpless as he can do nothing for the fawn. This bitter reality makes him very sentimental.

5 Write an essay on “travelling in the dark through the dense forest.”

Travelling a long way is itself problematic. Travelling in the dark through a dense forest might cause more difficulties. The poem “Travelling through the Dark” also suggests this type of difficulty.

Darkness itself is the main problem while travelling. If something goes wrong, it is difficult to correct it. For example, the lights may stop working, the vehicle may break down, or worse, an accident may happen. If it is a dense forest, we might encounter wild animals or hit them. At daytime this type of problem is less likely to happen.

The poet of “Travelling through the Dark” narrates a similar journey in the dark through a dense forest. He was driving along a narrow road by a river when he saw a dead deer on the way. He was lucky to notice it in time to avoid hitting it. But he thought others might have an accident. While trying to drag it off to clear the road, he saw the deer had a young inside. He feels sorry for the unborn young. The deer would not have been killed with its young during the daytime.

Thus, travelling in the dark through a dense forest may cause many problems. We need to be ready to face the troubles or should not travel in the dark, particularly through a forest.

6 Do you agree with what the narrator did?  “travelling in the dark through ?

We can agree with what the narrator did. It was necessary to remove the dead deer to clear the road. The road was narrow. Trying to avoid the deer would surely cause accidents at night. Moreover, the dead body would decay and cause pollution. By dragging the dead deer off the road, the narrator prevents pollution and accidents. He has fulfilled the duty of a responsible person.

7 Explain the title of the poem travelling in the dark through. Who are those travelling through the dark?

The title captures the journey the speaker has made during night. But it suggests something more. It is also a journey of confusion. He finds it hard to choose between emotions and responsibility. The ‘dark’ of the title could be the darkness of confusion. Like the poet, we might have to travel at nighttime through a narrow road in the jungle. And we might face the same problem of choice. The poet represents us all.

8 What is the tone of the poem: ironical, sympathetic, and indifferent?

The tone of the poem is sympathetic as the poet shows his noble feelings for the alive but unborn fawn inside the dead deer. The poet seems to be a nature lover. He wants to do everything to save the fawn. But he can do nothing because the deer is dead. He hesitates to remove the deer although it is dead. His love and concern for the fawn clearly shows that he is sympathetic.