This is a Story by Jeannette Christine Armstrong: Summary and Theme: Class 12 Major English 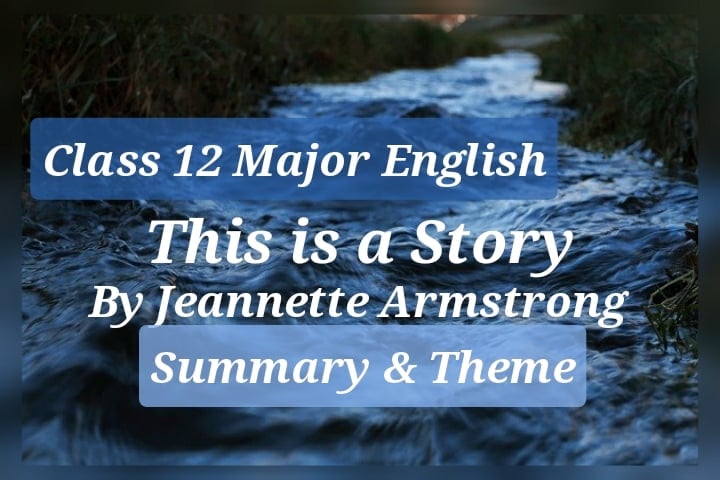 This is a Story by Jeannette Christine Armstrong: Summary and Theme: Class 12 Major English

Kyoti: An Animal: It is presented as a human being.

The Narrator: She tells the story in the first person narrative.

An Old Woman: She belongs to the native people of Okanagan

A Young Boy: The boy takes care of the Okanagan River.

Summary and Theme of This is a Story by Jeannette Christine Armstrong:

At the beginning of the story, the women were gathered at Owl Rock. We find shining sun. It’s hot. The narrator addresses the gathering of the women. She starts telling a story to pass time after the request of George. Her story goes like: Once, Kyoti was returning from Columbia river to Okanagan river. He noticed different unusual changes in his village.

People were following colonizers culture instead of their own. He found many changes in his village after the arrival of European colonizers. He calls them swallow people. He found colonizers houses everywhere. He didn’t find native Okanagan people there. He found a strange damp there. It blocked the Chief Joseph River.

The old woman claims that the native people started to follow the colonizers culture and lost their own. She called the colonizers monsters. She didn’t like modern houses and cultures of the colonizers. She hated them for imposing their culture on the native Okanagan people.

The old woman suggested Kyoti to visit the headman, Tommy in the North. On his journey to the North, he found  Okanagan people living in the colonizers modern houses. He also met many headmen on his journey. He advised them to clear the damp to allow the free movement of the Salmon fish.

People were eating the food of the colonizers forgetting their native food. He believes that the food is not healthy for them. He advised the headmen to eat native food instead of the modern food. The headmen didn’t like his advice. He was threatened and misbehaved by them. He found that they were captured by the colonizer’s culture and lifestyle. Their mentality doesn’t allow them to disrespect colonizers.

Then, Kyoti meets  a young boy. He was looking into the river because he was instructed by his mother to do it. They talked in the native language because the boy could understand it. His mother was instructed by their new headman, Tommy to look after the river. The boy’s ancestors were the chief of the Kettle falls.

They dreamt to see salmon fish there. But they never fulfilled their dream. The boy expects that one day he will see the river full of salmons. Kyoti goes to meet Tommy and Okanagan people. He calls them to break the damp to clear the free movement of the salmons. Kyoti wants to make native people feel the joy of flowing river and salmons.

In this way, the story ends showing the poor condition of native Okanagan people and culture. They lost their identity and heritage after the arrival of  the colonizers. They are suffering from identity crisis. They are following colonizers culture unwillingly. They are afraid of the colonizers rule.