The Treasure in the Forest: Question Answers/Exam Oriented Short Answers 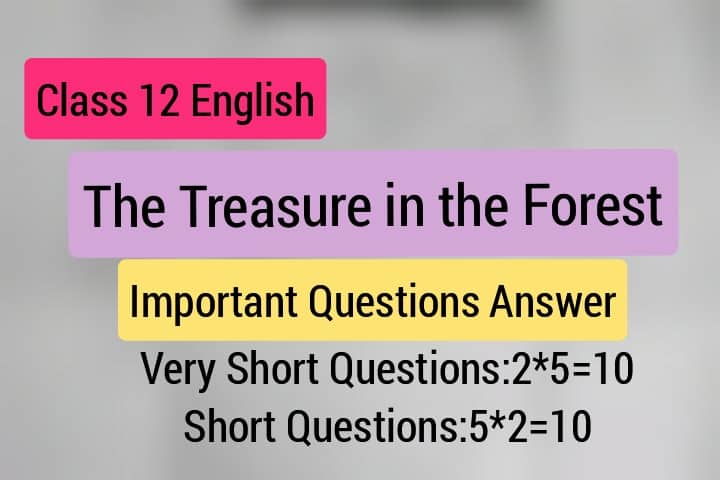 Short Stories: The Treasure in the Forest by H.G.Wells

a) Describe the expository scene of the story.

Ans: At the beginning of the story, we find a canoe of Hooker and Evans approaching the land. We also find deep green forest and sloppy hill.

b) What does the map look like and how do Evan and Hooker interpret it?

Ans: The map seems a rough map. Evans thinks that twisting lines are rivers and stars as places.

c. How did Evan and Hooker know about the treasure?

Ans: They knew about the treasure through the conversation of the Chinese man.

Ans: Evan dreams about the treasure and the Chinese man, Chang-hi. Evans and Hooker were in the forest in the dream. They saw three Chinamen were talking about gold. Chang-hi got a chance to take gold after shipwrecked from a Spanish galleon. He hid the gold on the island. Now, he was seeking help from others to bring it back.

e. What do the two treasure hunters see when they walk towards the island?

f. In what condition did the treasure hunters find the dead man?

Ans: The dead man had a puffed and purple neck. He had swollen hands and ankles due to poison.

g. How did the treasure hunters try to carry gold ingots to the canoe?

Ans: They used their coat to carry gold ingots to the canoe.

h. How were Evan and Hooker poisoned?

Ans: They were poisoned when a thin thorn picked in Hooker’s thumb. Evans rolled over Hooker. As a result, both of them suffered from the poison.

a. How do you know the story is set on a tropical island?

Ans: We come to know that the story is set on a tropical island when we found that they were going in a canoe towards a coral island. We find the same kind of features of a tropical island in this story like green forest, freshwater stream, palm trees, thorny bushes, etc.

b. Why do you think Evan and Hooker took such a risk of finding the buried treasure in a desert island?

c. Do you think the narrator of the story is racist? If yes, what made him feel superior to other races?

Ans: Yes, the narrator of the story seems to be a racist. He has presented Evans and Hooker as a superior race in comparison to the Chinese man.

d. What do you think is the moral of the story?

Ans: The moral of the story is we shouldn’t risk our life to become wealthy. Without life, there is no use of wealth.