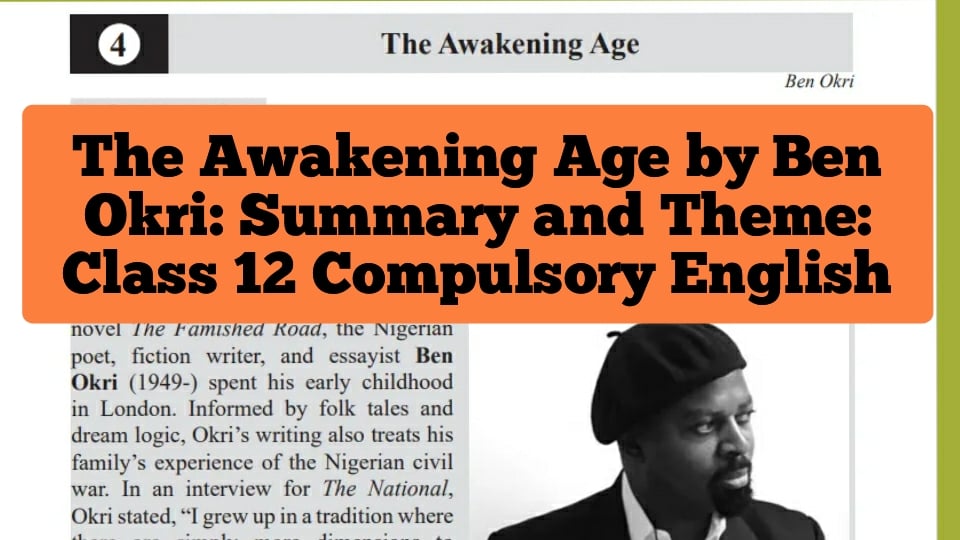 Theme of The Poem The Awakening Age by Ben Okri:

The poem presents the struggle of African people.  The people are searching peace, unity and solidarity among them after the Nigerian Civil War. The poem also expects unity and peace among different people of the world.

The poem is about African people and their struggle. They suffer a lot throughout the history. They want peace and brotherhood in the world. The African people suffer from different problems like poverty and starvation. They became jobless and suffer from unemployment problem. They also encounter different conflicts like political and ethnic. The poem depicts the suffering of Igho group. Igho group were oppressed by Northern Nigeria. They became the victim of ethno religious conflicts.

Then, the speaker talks about those optimistic people who are hopeful about human transformation from darkness to a new height. He believes that human can climb over the difficult hill using the rope of hope. Through the rope human can reach the age of equality, wisdom and enlightenment. Human creativity, hard work and hardship can lead people towards the age of awakening.

People’s heart is pure and white. So, they can easily climb over the hill. The speaker wants to end the problem of inequality, poverty and racial discrimination. He wants to see freedom, brotherhood, justice, unity and harmony among the people of the world.

Black people with optimism have vision of a new world within them. They can travel the meridian line. They can travel into the poverty free world. They are connected to each other with blade of hope to travel the new world. When people change their past perception, they can see the truth inside it. The poet believed that work, wisdom and creativity can change their vision and life.

Explanation of the Title ‘The Awakening Age’

African people were suffering from discrimination and different hardships in the past. They are still in sufferings. The poet/speaker wishes to awaken them from the age of darkness to the age of awakening. He expects peace, prosperity and happiness among the people of the world. He thinks that hope can lead them to the age. The age refers to the Nigeria’s Civil war time where Nigerian Government and Biafra(independent revel group) involved in a conflict. The conflict gave them  messages of unity, hard work, knowledge and innovation. African people came to know that racial and religious divisions create gap in our society. They understood the importance of unity, brotherhood, justice and peace after the conflict.