If I Should Die: Summary and Theme

Summary and Theme of If I Should Die by Emily Dickinson: Class 12 Optional English Note 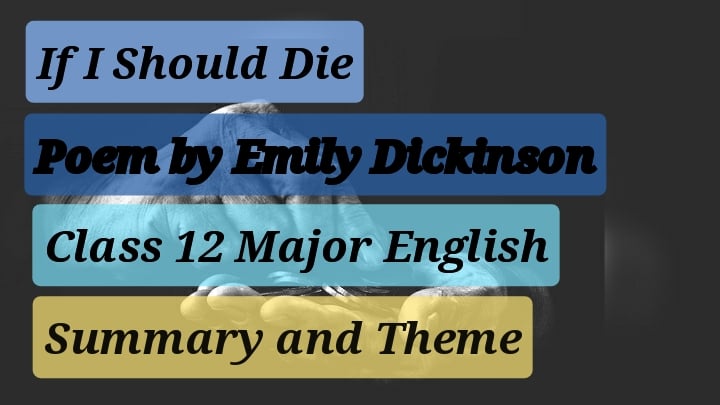 Summary and Theme of If I Should Die by Emily Dickinson:Class 12 Optional English Note

If I Should Die is a poem by Emily Dickinson, American poet. She brings the theme of death obsession and hidden humour in her poems. In this poem, she makes comparison between death and life of the survivors.   She points out that she has seen the same kind of routine life of survivors. Living people are not moved by the death of an individual.

They keep on doing their business because they are survivors of this business world. Time keeps moving. It is not affected by any one’s death. Nature keeps its routine work like birds making nests. Bees keep humming. People are continuing their commerce, trade, stocks and enterprise. The commercial world keeps moving.

Dying one feels serene tranquility but living one  can’t enjoy it. She has accepted her death. So, she accepts her death as a natural phenomenon. It is just like natural process of nature. It is only a circle of human life. She uses the image of daisy to symbolize the death of an individual. It is place on the tombstone of dead one.

This poem consists of two parts regarding the circle of life: the first part reveals the natural aspect of life as a very peaceful part, and the second part is portrayed as the human aspect, with more bustling energy.

She easily accepts the truth of death as a part of life and does not feel sad on her own death. The existence of each thing in nature has to vanish one day. Moreover, she believes that death is not the end, it is the beginning of the something new and exciting journey. She expects that the commercial world will grow more after her death.

Her death won’t affect any part of the world. It will keep growing and growing. Trade and commerce will grow more. No one will be affected by her death. Her point is that death of any individual won’t affect this commercial world and nature keeps its natural process naturally.

Theme of If I Should Die by Emily Dickinson:

The poem brings the theme of metaphysical idea. She imagines beyond the physical world. She imagines her death and remembers the world after her death. Death is a natural process and we must accept this fact. We all die and born again. It is a natural circle of life.