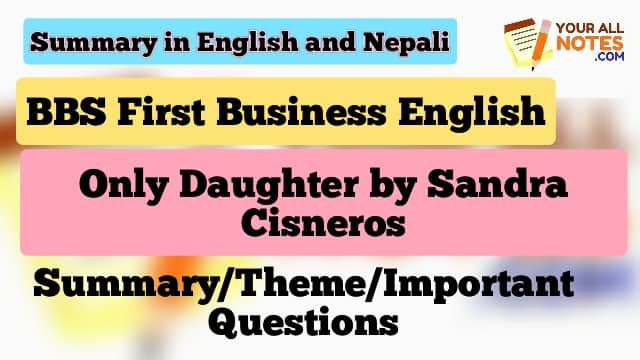 Only Daughter by Sandra Cisneros

This is an autobiographical story by Sandra Cisneros. In this story, she shared some of her bad experiences during her childhood. She is the only daughter in her family following her six siblings. Her father is Mexican and her mother is American.

She is not treated well as she is the girl/daughter of a family with 6 sons. Her brothers didn’t like playing with her because playing with girls was considered a low/inferior activity. said that there were seven He never counted her daughter as a daughter, although in reality, he had six sons and one daughter.

After her high school graduation, she went to college. She wanted to continue her studies and build a career, but her father wanted her to go to her college and find a boy/husband. For her father, going to college or going to college means finding and marrying a real boy. Her father thought getting a college education without finding a boy was pointless and pointless.

She spends most of her time alone overheated, neglected, and abused. And it was precisely this loneliness that shaped her later life. She later finished college and became a professor and a famous author/poet. She has proven that her daughter can be just as successful as her son. And after that, she was able to earn her father’s respect.

Only Daughter by Sandra Cisneros Summary In Nepali Language:

“Only Daughter” is a short story by Sandra Cisneros, which was included in her 1984 collection “The House on Mango Street.” The story is written in first person and is a reflection on the life and identity of the narrator, a young Chicana girl growing up in a poor neighborhood in Chicago. The narrator reflects on her relationship with her father and her desire to break free from the expectations placed on her as the only daughter in a traditional Mexican-American family. The story explores themes of identity, gender roles, and the American Dream.

“Only Daughter” is a short story by Sandra Cisneros that explores the relationship between a father and his daughter, and the daughter’s desire to assert her own identity. The story is written in the first-person perspective of the daughter, who is the only daughter in a large, traditional Mexican-American family. She is expected to fulfill traditional gender roles and pursue domestic pursuits, but she wants to go to college and become a writer. She struggles to reconcile her father’s expectations of her with her own aspirations, but ultimately chooses to pursue her own goals. The story is a commentary on the pressure faced by women to conform to societal expectations, and the power of personal choice and determination in overcoming them.

What does Cisneros mean when she writes that being an only daughter in a family of six sons “explains everything”?

Answer: When Cisneros writes that being an only daughter in a family of six sons “explains everything,” she is referencing the unique role and expectations that are placed on her as the only daughter in her family.

As the only daughter, she is expected to conform to traditional gender roles, such as being more domestic and nurturing, and to take on a more subservient role to her brothers. She feels that this explains why her father wants her to focus on domestic pursuits, rather than her aspirations to go to college and become a writer.

The phrase “explains everything” suggests that the fact that she is the only daughter in her family is the root cause of the expectations and limitations placed on her, and also the reason for her desire to assert her own identity and break free from these expectations.

What advantages and disadvantages does Cisneros see in being the only daughter’? In being ‘only a daughter?’

Answer:  In the short story “Only Daughter” by Sandra Cisneros, the narrator (the only daughter in the family) describes some advantages that she sees in being the only daughter.

One advantage is that she is given more freedom than her brothers, as her father does not hold her to the same strict standards that he holds for his sons. This allows her to develop a closer relationship with her father, and to gain his trust and support for her dreams of going to college and becoming a writer.

She wants to use her position as the only daughter to assert her own identity and to pursue her own goals, rather than being confined to the domestic roles that are expected of her.

Furthermore, she sees being “only a daughter” as a potential disadvantage as well, as she is constantly compared with her brothers and judged by her father’s standards which are set for his sons. It makes her feel invisible and not taken seriously by her father.

Why does her father think she has wasted her education? What is her reaction to his opinion?

Answer:  In the short story “Only Daughter” by Sandra Cisneros, the narrator’s father thinks she has wasted her education because she is not using it to pursue a traditional career or domestic pursuits. He expects her to become a teacher or a secretary, as these are considered respectable and appropriate occupations for women. However, the narrator has other aspirations, she wants to go to college and become a writer. Her father does not understand or approve of her desire to pursue a career in writing, which he sees as a waste of her education and a rejection of traditional gender roles.

The narrator’s reaction to her father’s opinion is one of frustration and disappointment. She feels that her father does not understand her or support her goals. She wants to prove to him that she can be successful in a non-traditional career and that she is not wasting her education. However, she also feels guilty and conflicted, as she doesn’t want to disappoint her father and she values his opinion. She tries to reconcile these conflicting emotions by trying to explain her aspirations to her father and hoping that he will understand. Ultimately, she chooses to pursue her own goals, even though it means potentially disappointing her father.