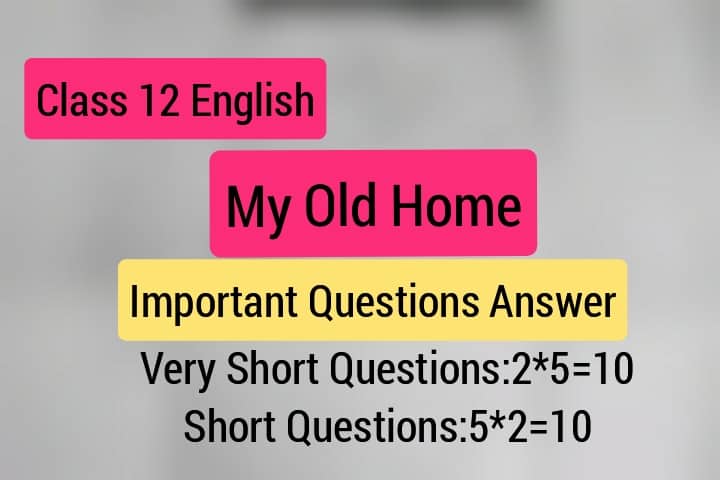 a) How does the narrator describe his feeling at the arrival of his old home?

Ans: He becomes excited at the beginning of his arrival but he finds no change in his village.

b. What were the three kinds of servants in China then? What does it indicate about contemporary Chinese society?

Ans: There were the three types of servants in China then. They were Yearlongs, Short-timers and Busy-monthers. It indicates a slavery system of that time.

c. What makes the narrator nostalgic? What did he do with Runtu in the teenage?

Ans: When the narrator meets with his childhood friend, Runtu, he becomes nostalgic remembering his past time with him. He used to play with Runtu on the sandy grounds in the teenage.

d. How did Runtu hunt a Zha in his young age?

Ans: Runtu used to hunt a Zha in his young age by stabbing it.

e. How does the narrator make a humorous picture of Mrs. Yang?

Ans: He presents her as a beancurd lady. When the narrator does not give her old furniture, she scolds him.

f. According to the narrator, what were different factors that made Runtu a poor man throughout his life?

Ans: Class differences, load of tax, social responsibilities and famines were major factors that made Runtu a poor man throughout his life.

g. How does the narrator help Runtu before leaving the old home?

Ans: The narrator gives him tables, candlesticks, an incense burner and scales.

b. How does the story support the proposition that the relationships of childhood are innocent, impartial and disinterested?

Ans: There were no class gap between Runtu and The Narrator during their childhood time. They were in selfless friendship. They simply love each other and enjoy their company without considering their class differences.

c. After reading the story, what inferences can you make about contemporary Chinese economic and social system?

d. What does the story indicate about the geographical features of the narrator’s hometown?

Ans:  The story is set in 1911. It captures the time during the overthrow of the Qing Dynasty in China. The geographical features of the narrator’s hometown is presented as gloomy. We see winter and clouded sky. The writer wants to show the pathetic condition of the narrator’s village. It has no significant change. People are still suffering from the same pathetic condition like Runtu.