Everything That Rises Must Converge: Class 12 Major English Note

Everything That Rises Must Converge: Summary and Theme: Class 12 Major English Note 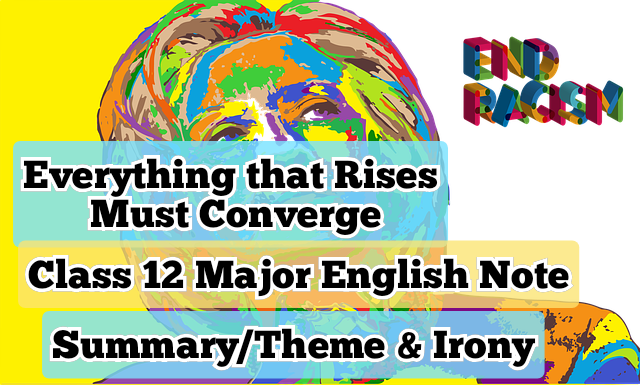 Summary of Everything That Rises Must Converge

Irony in Everything That Rises Must Converge

The story is about Julian and his racist society. He has completed his graduation. He wanted to be a writer. He is living in the south with his mother  after returning back to his hometown. Julian’s mother takes a weekly exercise class after her doctor’s suggestion. She has to manage her blood pressure. Julian goes with his mother in her weekly classes because she is afraid to travel alone at night.

Their family was descendants of a white rich family. They belonged to an aristocratic family. His great grandfather used to work as an governor of the state. He had a plantation. It had two hundred slaves. But Julian’s mother struggled hard to raise him. She was a single mother. Her neighborhood was very tough.

She wears an expensive purple hat for her exercise. They talk about the social changes in the south while walking to the bus stop. They start their journey by a bus. They start to talk with different white passengers on the bus. The white  woman passengers were discussing about their dying southern tradition. They were lamenting over the loss of their culture and tradition in the south.

At the next stop, he finds a well dressed black man in the bus. He enters the bus. He arranges to sit with him. He wants to talk with him to make him his friend. He doesn’t have a black friend. Julian dreams of making a black friend. His mother is not happy with him. But he finds abnormal behavior of the black man. He expected that he would behave nicely to him. The man didn’t respond him nicely.

At the next bus stop, two black passengers enter the bus. They were Carver and his mother. They took seats next to them. The woman had angry face. She seems disinterested to others.

Julian’s mother wanted to give a coin to Carver. It was her habit to give coin to cute children. But Julian warns her to do so. She gives a penny to Carver after exiting from the bus. But Carver’s mother hits Julian’s mother with her pocketbook for giving the penny. Julian’s mother falls on the ground. She suffers from a stroke. Julian asks for help. He becomes able to help her. They return back to home instead of going to the class. Julian realized that his mother learned a lesson.

Theme and Irony in the story Everything that Rises Must Converge

The story is about racial prejudices prevalent-ed in the south America in 1960. There is assimilation and racial integration on paper but in reality, there is still discrimination in the society and people’s heart. People don’t speak about racism but it is inside their head.

The story shows the context of middle class white American people. They pretend to be selfless but in reality racism is hidden inside their brain. It comes outside in different forms. It is shown in the story with the help of Julian’s mother. Julian wants and supports social integration but his mother pretends to follow it.

It proves ironical condition in the society. Julian’s mother belong to typical example of 1960’s woman. She belonged to a white wealthy family. Her family used to own slaves. She had luxurious mansion in the past.