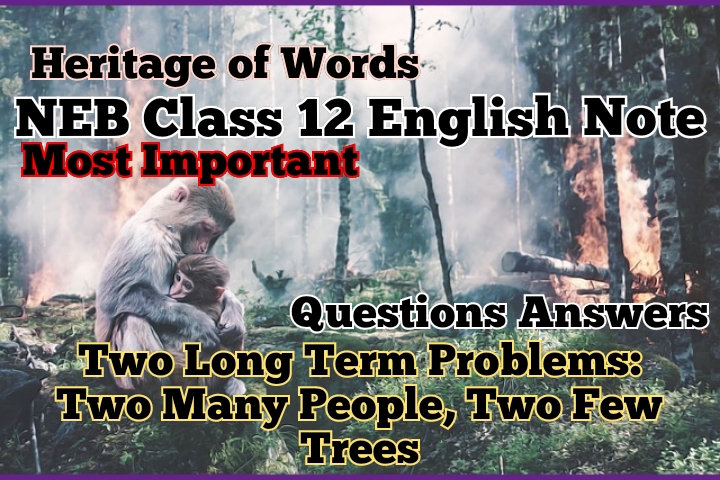 Two Long term Problems: Too Many People, Too Few Trees

1 What are the causes, consequences and cures of overpopulation and deforestation?

OR, Discuss the two long-term problems raised by Nissani in the essay.

Overpopulation and deforestation are two related long-term problems raised by Moti Nissani in his essay. World population continues to grow and trees become fewer and fewer.

The main cause of overpopulation is a greater number of deaths than births. There have been advances in technology, nutrition, sanitation and medicine. These advances have helped people live longer. Decreased infant mortality has made children reach reproductive age. Moreover, birth rates of many underdeveloped countries have not decreased.

The main remedy of overpopulation is birth control. We can do it the way countries like Germany, Sweden and China have done: using various family planning measures. To make it more effective, government actions and media campaigns are necessary. Modernization and literacy create awareness about the need of small family for improved quality of life. This women empowerment is another way. It helps them to be independent and engage more in works than in childbirth.

Overpopulation and modern lifestyle are the main causes of deforestation. People clear forests to create more land for farming and pastures. They cut trees for firewood and timber. Trees are also cut down to produce newspapers and other paper products and to fulfil our demands of expensive furniture. Construction of buildings and tourism also diminish forest areas.

Among the many consequences of deforestation, the direct impact is on the quality of human life and on other species of plants and animals. Destruction of forests affects the carbon cycle, causing oxygen to be less than carbon dioxide. This contributes to greenhouse effect and climate change. Similarly, with the loss of trees, we will face natural calamities like floods, landslides, soil-erosion and droughts.

The main remedial measure of deforestation is mainly population control. To reduce pressure on trees for firewood, we can use smokeless oven that needs less firewood. Alternative sources like biogas can be used. To discourage people from cutting trees, we need strict laws to punish them. Imposing high tax on wood products will also help. Another is reforestation and awareness about the dangers of deforestation.

2 Explain the links between overpopulation and deforestation.

Overpopulation has a bad impact on the natural world, particularly on the forests. To produce more food for more people, more trees are cut down to create more land for farming. This means deforestation, which can have dangerous and long-term effects. Destruction of forest will cause soil erosion, landslides, drought and climate change. After deforestation, every heavy rainfall is likely to cause flood in the plains. The destruction of forest leads to climate change, greenhouse effect and global warming, which will affect many species of animals and plants.

Thus, overpopulation and deforestation are related. The more population there is, the fewer trees will become. To save forests, population should be decreased.

3 Are most living Nobel Prize winners optimistic about the future of humanity? Why or why not?

Most living Nobel Prize winners are not optimistic about the future of humanity seeing the declining condition of the environment caused mainly by overpopulation and deforestation. Many of our activities have irreversible effect on limited natural resources and on the whole environment. This can change our world in such a way that it will not be able to sustain life. As a result, the future of humanity is at risk. They suggest us to correct our activities if we hope to have a safe future.

4 What is wrong, in Nissani’s views, with a treeless Nepal?

If Nepal becomes treeless, it will lead us towards a hard future. This can have dangerous and long-term consequences. Destruction of forest leads to the loss of many species of plants and animals. With fewer trees, the quantity of carbon dioxide is more than oxygen, causing greenhouse effect, global warming and climate change. It will also cause natural calamities like soil erosion, landslides, draught and flood. This could be the condition of treeless Nepal.

5 What leads Nissani to the belief that the world is facing an overpopulation problem/crisis?

Because of advances in technology and medicine, people live longer. Infant mortality has also decreased. But birth rates of many countries have not decreased. 10,000 people are added per hour in the world, and every year world population increases by 80 million. He offers the example of Nepal.  In 1951, there were 9 million people in Nepal. After less than 50 years, the population grew to 23 million. This fact leads Nissani to say the world is facing an overpopulation crisis.