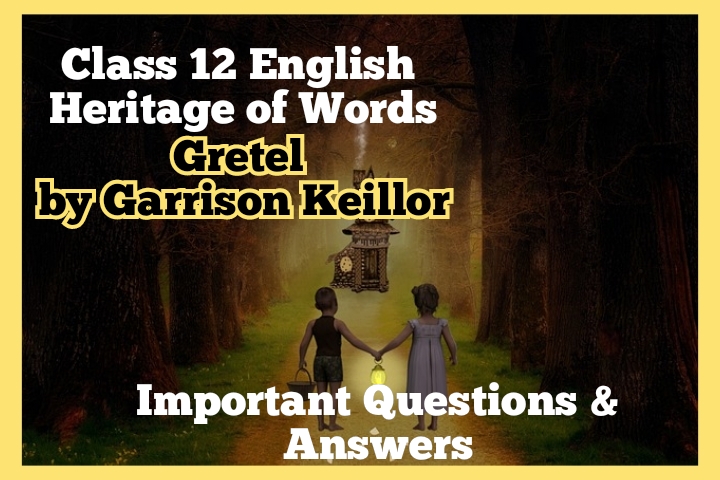 1 Interpret the story of “Hansel and Gretel” from feminist point of view.

OR, Do you think Gretel represents modern feminist women?

OR, How is Garrison Keillor’s Gretel? Sketch the character of Gretel.

Keillor’s “Gretel” is the feminist interpretation of the original story “Hansel and Gretel.” Here Gretel represents the modern feminist women. She raises voice against injustice and inequality.

Keillor’s Gretel is strong, clever, brave and commanding. She guides Hansel in every difficult situation. She tries to convince the readers not to believe the original story. Gretel claims that she was deceived by both Hansel and his lawyer. They rewrote the story and did not give her equal profit from the selling of the book. She also claims that all the female characters were presented negatively and male characters positively in the older version.

Gretel criticizes male superiority in the society. She says her description as a weak, weeping character in the so-called original story was false. Actually, her brother was weak. She cried only because she was tired of carrying him on her back. She calls the step-mother a good woman. She was forced by her husband to leave the children in the forest. The witch was also good because she gave them food and shelter in need. Gretel feels sorry to have killed her.

2 “Gretel” gives a different version of the story “Hansel and Gretel.” Explain the points of differences between the two.

“Gretel” is a modern feminist version of “Hansel and Gretel,” so there are some points of differences. Here Gretel is shown as a heroic character who handles everything. Gretel kills the witch, releases her brother and calls duck to help them cross the lake. The original story showed her as weak and weeping. The father was kind, helpless and loving. Here he is described as selfish. The step-mother is not mentioned in detail as in the older version but she is given a name Gladys.

3 Why does Gretel blame her father and brother?

Gretel blames her father and brother for cheating her. They want to exploit her and her step-mother. She should have got half of the profits earned by selling the book. However, Hansel’s lawyers put her under a spell and made her sign another contract. As a result, she got very little money. Hansel and the father live in a comfortable big house but Gretel and the step-mother have no house of their own. She calls her father selfish, unkind, drunkard and irresponsible.

Post Views: 1,019
Class 12 Compulsory English Heritage of Words Gretel Garrison Keillor Important Questions and Answers Do you think Gretel represents modern feminist women? Gretel Garrison Keillor Gretel” gives a different version of the story “Hansel and Gretel.” Explain the points of differences between the two. How is Garrison Keillor’s Gretel? Sketch the character of Gretel. Interpret the story of “Hansel and Gretel” from feminist point of view. Why does Gretel blame her father and brother?
Share. Facebook Twitter Pinterest LinkedIn Tumblr Email