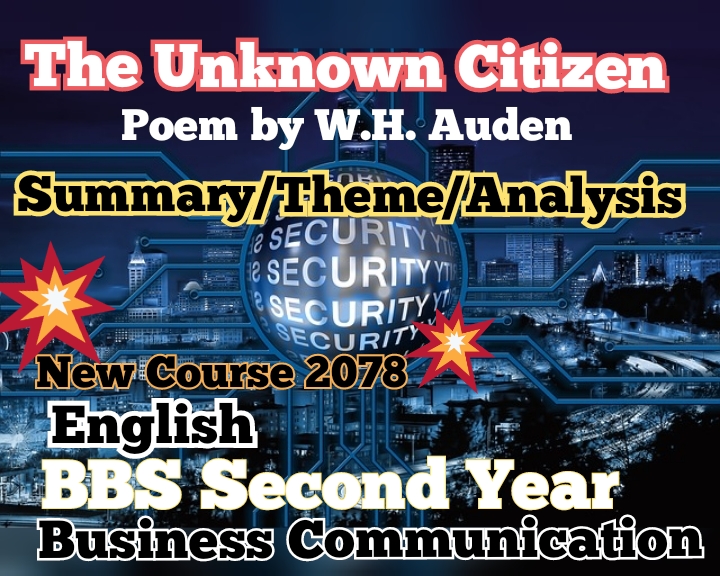 Short Summary/Analysis of the Poem ‘The Unknown Citizen’ Poem by W.H. Auden

The poem was written by W.H. Audent (British Poet). The poem is an elegy. Elegy is a poem written for the dead. It is a satirical elegy. It praises a man who has died recently.

The man lived his life according to the government plan. The person always followed social norms and values to protect the government rules and regulations. He never questioned against it. By showing the past normal life of the dead person, the poet is satirizing the standardization (guidelines) of modern life set by the state.

In fact, the poet is making fun of such standard modern life ruled by state oppression. In modern life, people rush for standard life like the right job, the right number of kids, etc. People declare it as a symbol of successful life. But the speaker doesn’t find such kind of standard life as a total life.

He served his society throughout his career and life.  He did the same job in his life except serving in the war. He worked at Fudge Motors Inc. He was liked by his colleagues at the company. He had the health insurance. He had also modern possessions like car, radio, fridge, etc. He had a peaceful family life with a wife and five children. At last, her retired from his job and life.

Theme of the Poem ‘The Unknown Citizen’ Poem by W.H. Auden

The poem makes fun  of an elegy given by the state. The government and its institutions delivered the elegy for the citizen who always followed the standard norms of the state. In modern world, a state has enough power to control and oppress its citizens. People are under the surveillance of the state.

Through this poem, the poet wants to show that many people are losing their freedom and identity due to standardization of modern state. The state is delivering the elegy not to give sympathy for the dead but attracting people to follow the same standard guideline of the state to get the same kind of treatment after his/her death.

Analysis of Title of  the Poem ‘The Unknown Citizen’ Poem by W.H. Auden

Title of the Poem is ironic because the title says ‘the unknown citizen’ but the state knows everything about his citizen. The state has all necessary information about the dead. In fact, the dead person is only known to his state. He lost all his freedom throughout his life. He always lived under the surveillance of the state. So, the poem raises the issue of freedom crisis of the state citizen.