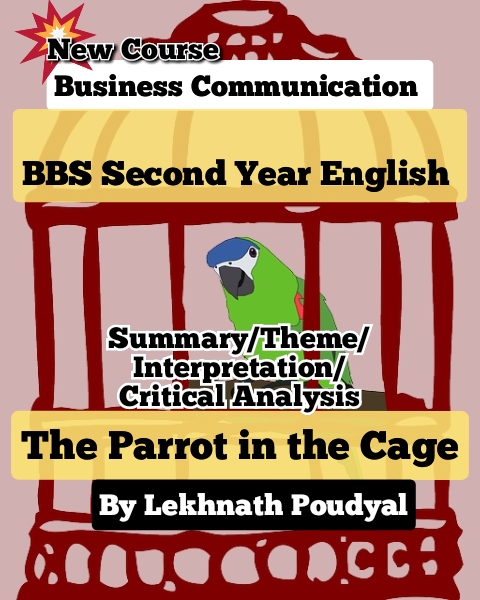 The Parrot in the Cage  By Lekhnath Poudyal

Summary/Synopsis of The Parrot in the Cage

A parrot is captured and a narrow iron cage is his world now In place of the open sky. Now his free, happy life is finished. There is only pain and sorrow, no peace or rest. His eyes have swollen by crying. Trying to get out, his beak has become blunt, and wings and feet have become weaker. His sad and weeping old parents need him. But there is no way out.

In the forest, his real home, he enjoyed cool waters, playing in the green trees, eating sweet fruits and living with family and friends. But now all this is a dream. There are only enemies around him and no one for help. Freedom seems impossible. Every day will be hard. He suffers heat and cold, passing the days weeping and lamenting. He does not get water on time. His throat has become dry by talking and singing for people. He is beaten if he refuses. He does not get enough to survive in return for his service. Instead, he gets insults, scolding and threats.

He is only a plaything for humans. They take pleasure in his suffering. His power of speech has become a curse. He prays to God to pity on him and help him escape. Humans exploit the virtues in other creatures. They are not satisfied until the creatures die. Therefore, the parrot begs God not to give life to parrots as long as a single human remains on earth.

Theme/ Interpretation of The Parrot in the Cage:

We can interpret this poem on three levels. First, it shows unequal human-animal relationship. We see cruel treatment of other creatures by human beings. The parrot’s pitiful condition inside the cage contrasts with his happy forest life. We control and exploit animals in many ways. Putting the parrot in a cage is just one example. The poet suggests us to stop such injustice. The second interpretation is political.

It suggests Nepalese people’s freedom trapped in the cage of Rana rule. The parrot represents the condition of captured freedom fighters. Finally, there is also a spiritual side to the poem, a philosophical message. The caged parrot is a symbol of the free, immortal human soul bound in the mortal body. The parrot tries to free himself from the cage. The poet suggests us to rise above the body.

Critical Analysis of The Parrot in the Cage:

According to the parrot’s description, his condition is pitiful. But he might be exaggerating the fact. Humans capture animals not only for cruel treatment. We also do so to preserve them. In forest, some powerless animals and birds might face danger and difficulty in living. In such case we need to protect them by capturing. We also produce good breeds of animals in systematic ways. The poem neglects such good acts and passes judgement on the whole human race based on an example. All humans are not cruel as the parrot thinks.

The parrot’s condition has made us think about our own life. Future is uncertain. Our life may suddenly change from happy to tragic condition, from good to bad time. Just as the parrot becomes a plaything in the hands of humans, we are helpless before time. At least the parrot has memories of happy time although he is in a cage now. We can learn this from him: keeping good memories for bad times.