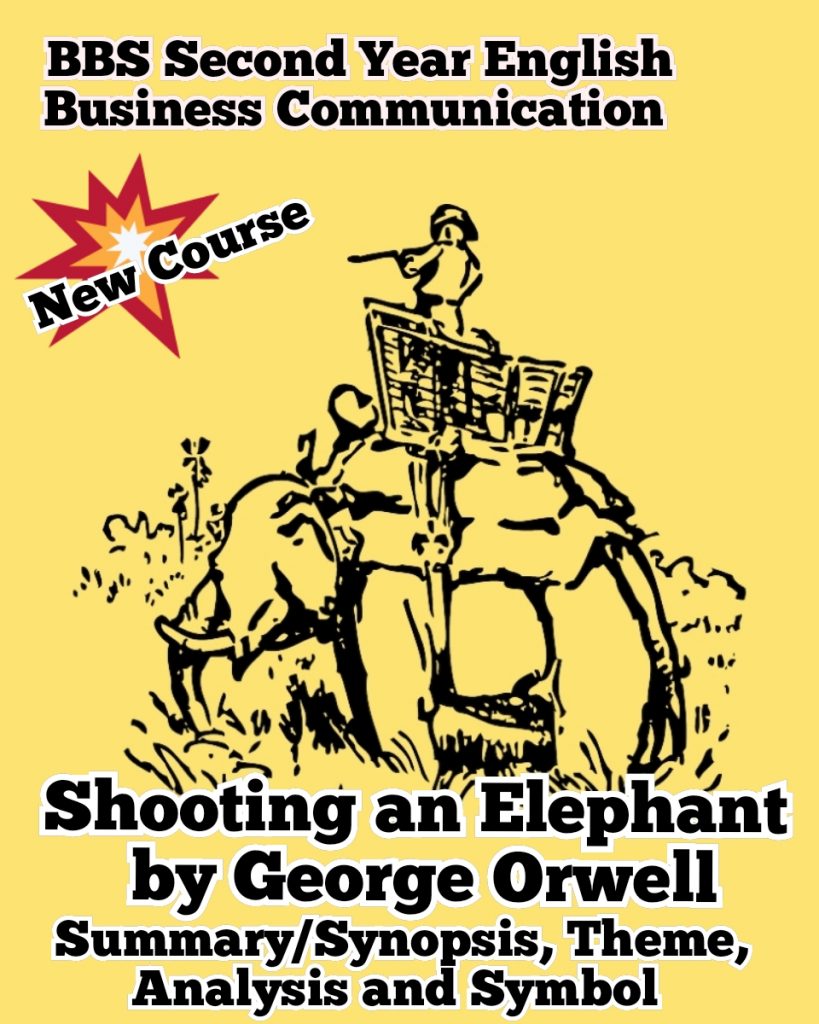 Point of View in Shooting an Elephant:

The writer uses the first person point of view to present his experience in Burma as a police office of the British Empire.

Short Analysis of the story Shooting an Elephant

It is a narrative essay where we find a story of a police officer’s interaction with a wild elephant. It is written by George Orwell. It presents Orwell’s time story. Orwell used to serve as a police officer for the British empire in Burma. The story interestingly brings an inner mental conflict of the central character, the police officer. We come to know that he wasn’t satisfied by British rule in Burma.

Summary/Synopsis of the story Shooting an Elephant:

The whole story moves around a single day event of shooting an elephant. The story begins when the speaker knows that an elephant has become violent by broking its chain. He comes to know that an elephant is running here and there uncontrollably. The elephant is moving through a market. He is obliged to follow his duty by controlling the elephant.

He comes to know that two thousand people are waiting for his shooting the elephant. They expects that he will kill the elephant. Their expectation is high because he represents powerful British empire who has power to take the action. He thinks that if he doesn’t shoot the elephant, Burmese people will start mocking him.

The story presents the theme of imperialism. Imperialism is a policy of a country to increase its territory, power, influence and control by using different means like military force. The writer doesn’t support imperialism.In fact, he is against it. He hates it. In this story, he wants to show the reader about the bad impacts of imperialism on ruled people like Burmese.

He hints that both ruler and ruled are the victims of it. He shows his hate towards the British Empire during his service as a police officer in Burma. He shows Burmese people losing self-dignity and identity when they were ruled by the Empire. They were hated and oppressed by the rule. He shoots the elephant because he is also a victim of the imperialism. He has the duty to serve the empire as a police officer.

The central symbol of the story is the elephant. It captures the bad effects of imperialism on ruler and ruled. The elephant doesn’t have freedom to travel here and there like the people of Burmese. It has lost its self respect and dignity. The British Empire’s treatment towards Burmese people can be evaluated from the elephant’s critical situation at last.  It shows lack of humanity. So, the symbol symbolizes the contemporary situation where Burmese people were hated and oppressed by the rule.