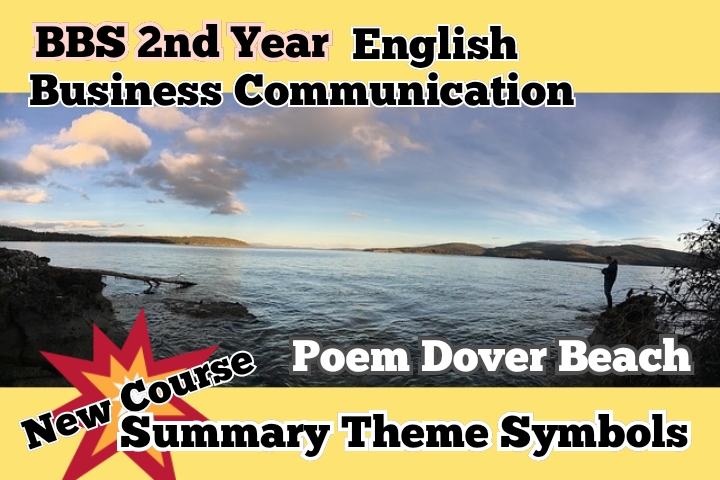 Speaker: General Human being who is serious about the loss of religious faith in the human world.

Theme of the Poem Dover Beach

The poem presents the theme of a crisis of faith in human world. The speaker presents gloomy world where he doesn’t find any hope for beauty and peace in his life because of human crisis. The poem tries to tell us about the empty struggle of human being. So, the poem presents the existential  as well as absurd theme.

The poem is written in the Victorian Age. It captures that time’s religious crisis. The speaker laments over the loss of religious faith and certainty due to rising advanced technology in the field of geology, archeology, biology, etc.

In the same way, the poem also presents the theme of sadness in nature. The speaker doesn’t find nature as a source of inspiration for him. He takes it as a source of deep sadness. He is sad because human beings are only a single unit of nature rather than its center.

Summary/Synopsis of the Poem Dover Beach

The speaker is observing a calm sea. He looks tide and reflection of moon on the sea. He finds fading French coast but English coast is standing tall and bright. The speaker addresses another person to listen the sound of the pebbles created by the sea waves. He compares the sound with eternal sadness of human being.

In the same way, We come to know that the addressee is his lover. He expects that they must treat each other with honesty and simplicity. The world doesn’t have joy, love and peace, so they must maintain it themselves.

Symbols in the Poem Dover Beach:

The poet has used different symbols in the poem. The most important symbol is sea. The sea symbolizes unstable human thoughts. It also symbolizes human sadness and despair. The speaker perceives sea as a medium to study human nature that is changing continuously like sea waves.

There is also another symbol of the land. The land symbolizes human world full of violence. It lacks faith and love. So, the land represents gloomy human world where religious faith is decreasing everyday. Another symbol used in the poem is the shore which represents the place for human conflict.