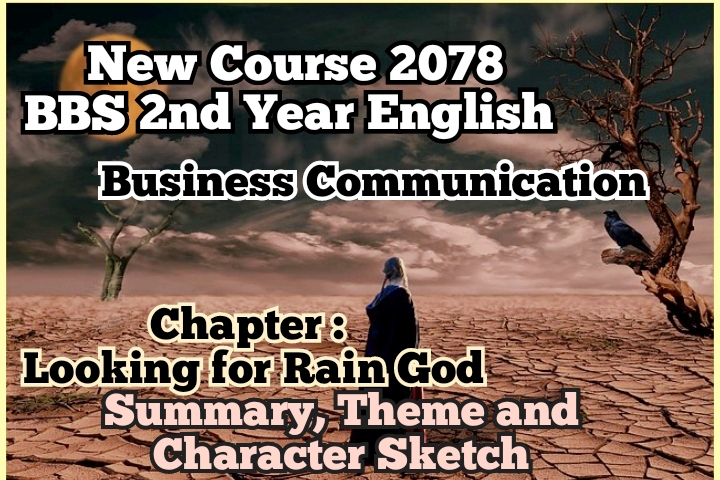 “Looking for a Rain God”

Setting of the Story:

Farmers are farming off the vast bush land.

Point of View in the story “Looking for a Rain God”:

We know the story from the point view of the central character: Mokgobja

Synopsis/Summary of the story “Looking for a Rain God”

This story presents struggle of  an African poor family’s against a drought.  At last, they get tragedy.The villagers are suffering and trying to come out of a 7-year devastating drought. Due to drought,  farmers suffer from starvation. They are obliged to depend on the rain to grow their farmland. At last, they feel relief when the rain comes. Farmers start farming after the end of drought.

The central character, Mokgobja, starts ploughing his land. But the situation goes against the farmers becauses the rain only lasts for two weeks. The villagers suffer from the fear of upcoming starvation. Mokgobja makes a plan to start  an ancient rain-making ceremony initiated by his ancestors. The ceremony is a kind of ritual where one has to sacrifice his/her young children to Rain God.

It was believed that such rituals would please the Rain God. Mokgobja’s son Ramadi becomes ready to sacrifice his two daughters to the Rain God. Even after the ritual, the rain doesn’t appear. The villagers are curious about the missing children of Ramadi. The police come to investigate the case. The children’s mother (Tiro) confesses everything. As a result, Mokgobja and  Ramadi are arrested and sentenced to death.

Theme of the story “Looking for a Rain God”:

The story has many themes like people’s struggle against nature, hope in life and human survival instinct. The central character Mokgobja does everything to survive his family. His intention is pure and natural. He has hope that he will fight against natural disaster like drought by hook or crook. He is ready to sacrifice his son’s daughters to make rain. So, the story presents the theme of human survival instinct. In the same way, the story also presents struggle of rural farmers who still do traditional farming to survive.

The whole cultivating local area is reliant upon nature. At the point when the dry spell comes, the ranchers become totally defenseless. At the point when nature becomes heartless to man, man also becomes cruel and there is a deficiency of mankind. The dread of death and enduring draws out a sort of endurance sense in man which rises above the restrictions of mental stability and levelheadedness. Therefore, what is considered as unnatural  becomes regular and adequate.

He is 70 years old laborious farmer.

He follows his tradition and rituals.

He is the head of his family.

He is a victim of the natural disaster-drought.

He sacrifices his son’s daughters to make rain.

Techniques in the Story:

The writer has used different techniques to present his theme of man’s struggle against nature to survive. Major techniques are Contrast and imagery, Foreshadowing, Personification, Symbolism, Simile, Irony, etc.