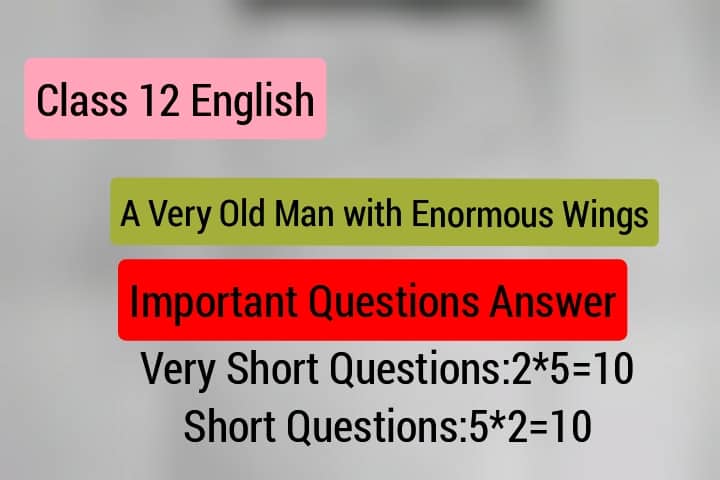 a. How does the narrator describe the weather and its effects in the exposition of the story?

Ans: The setting of the story is rainy season. Pelayo is throwing crabs because he thinks his son’s fever is caused by crab’s smell.

b. Describe the strange old man as Pelayo and his wife first encounter within their courtyard.

Ans: He had bald head and half plucked wings. He had empty mouth.

c. Why did Pelayo and Elisenda imprison the old man in the chicken coop?

Ans: They thought that the old man was an angel. It had come to take their child.

d. Why was Father Gonzaga not sure about the old man being a celestial messenger?

Ans: Because of ragged appearance and not being able to speak Latin language, Father Gonzaga not sure about the old man being a celestial messenger.

e. Many people gathered at Palayo’s house to see the strange old man. Why do you think the crowd assembled to see him?

Ans: The crowd gathered there to see the strange old man with larger wings.

f. Some miracles happened while the crowd gathers to see the strange man. What are these miracles?

g. State the irritating things that the people did with the strange old man.

Ans: The people wounded him with a branding iron. They also pulled his feathers and threw stones.

h. How and why was the woman changed into a spider?

Ans: The woman changed into a spider because of lightning.

i. Describe how Elisenda saw the strange man flying over the houses.

Ans: She was chopping vegetables when the strange man was trying to fly. After many attempts, he succeeded to fly.

Every Morning I Wake: Important Questions and Answers for the Final Exam

A Day by Emily Dickinson: Important Question Answer for the Final Exam

The Half Closed Eyes of The Buddha and The Slowly Sinking Sun: Question Answers/Exam Oriented Short Answers