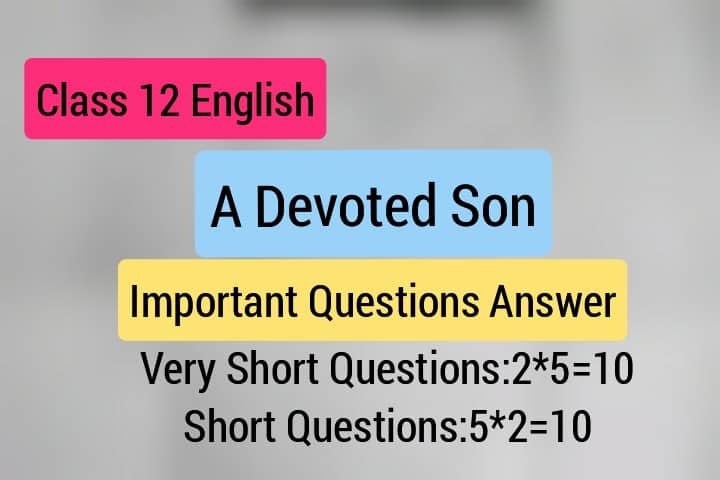 a) How did the morning papers bring ambiance of celebration in the Varma family?

Ans: The morning papers brought ambiance of celebration in the Varma family because it displayed Rakesh’s the highest rank in the medical examination in the country.

b) How did the community celebrate Rakesh’s success?

Ans: The community celebrates Rakesh’s success by congratulating him.  They also brought gifts.

c) Why was Rakesh’s success a special matter of discussion in the neighbourhood?

Ans: Rakesh’s success was a special matter of discussion in the neighbourhood because he got the highest rank in the medical examination in the country.

d) How does the author make fun with the words ‘America’ and ‘the USA’?

Ans: Verma thinks that USA is right word not America. He treats the word ‘America’ as illiterate’s word.

e) How does the author characterize Rakesh’s wife?

Ans: She is presented as uneducated and an old fashioned pretty fat woman.

f) Describe how Rakesh rises in his career.

Ans: At the beginning, he becomes a doctor in the city hospital. After some time, he reaches to the position of director. Later on, he opens his own clinic. People recognizes him as the prestigious doctor in the town.

g) How does the author describe Rakesh’s family background?

Ans: Rakesh’s family background was financially very weak. They were illiterate. They used to sell kerosene and vegetables.

h) What is the impact of Rakesh’s mother’s death on his father?

Ans: Rakesh’s father is moved by her death. He becomes very sad.  He suffers from disease named a peevish whim.

i) What did Rakesh do to make his father’s old age more comfortable?

Ans: Rakesh starts to give personal care to his father after his mother’s death. He brings morning tea and reads out newspaper to him.

j)did the old man try to bribe his grandchildren?

Ans: The old man tried to bribe his grandchildren to eat Jalebis.

k) Are Mr. Varma’s complaints about his diets reasonable? How?

Ans: No, Mr. Varma’s complaints about his diets are not reasonable because Rakesh is giving an appropriate and healthy diets to his father to cure his father.

a) How did Varma couple make sacrifices for their son’s higher education?

Ans: They worked day and night to uplift the career of their son. They lost their time, money, effort, career, life and happiness to make him a doctor.

b) Mr. Varma suffers from diseases one after another after his wife’s death. Would he have enjoyed better health if she had not died before him? Give reasons.

Ans: He would have enjoyed better health if she had not died before him because she used to take care of him before her death. He is deeply moved by her death. As a result, Varma suffers from diseases one after another after his wife’s death.

c) Dr. Rakesh is divided between a doctor and a son. As a son, he loves his father and worries about his weakening health but as a doctor he is strict on his father’s diet and medicine. In your view, what else could Rakesh have done to make his father’s final years more comfortable?

Ans: He should be more polite and respectful forgetting himself as a strict doctor. He should bring his aunt to take care of his father. His father is alone. He needs love and care from dear and near one. He is deeply moved by his wife’s death.

d) What does the story say about the relationship between grandfather and grand children?

Ans: We find good bonding between grandfather and grandson. Grandfather manipulates his grandchildren to eat sweets.

e) Do you call Rakesh a devoted son? Give reasons.

Ans: Yes, Raksh is a devoted son because he takes care of his family even after reaching a respectful position in his society. He doesn’t leave his country even after getting  important offer from foreign country. He is happy to share joy and grief with his family.