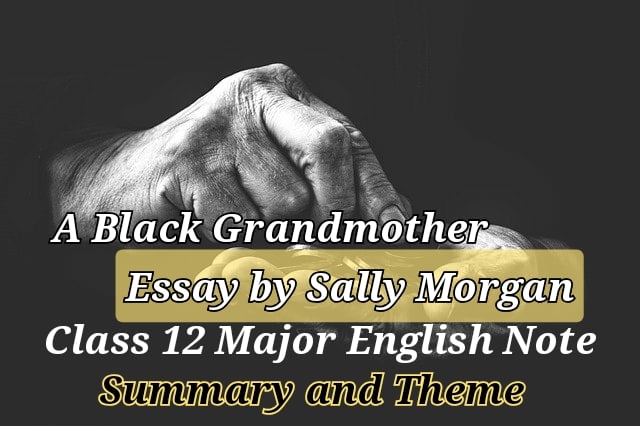 Characters in A Black Grandmother by Sally Morgan:

Sally: The Narrator and the Central Character of this Narrative Essay

Summary and Theme of the Essay A Black Grandmother by Sally Morgan: Class 12 Optional English Note

A Black Grandmother is an essay by Sally Morgan, Australian writer. The writer uses a first person narrative to describe her Aboriginal origins. This essay is taken from her autobiography ‘My Place’. It brings her discovery of her origin.

This autobiography is related with the time when she was fifteen. She was school going girl at that time.  She wanted to be an artist at that time. She didn’t want to continue her study and school. She failed all subjects except arts and English in the second term exam. Her mother scolded her for not being serious and giving importance to art. She invites her friend, Judy, to convince her daughter about the importance of study than art. Sally became unhappy by her mother’s behaviour.

She recollects that time memory to conclude this autobiography. When she was in fifteen, she was with her mother, grandmother and sister, Jill. Her mother was against her will of being an artist. She thought that an artist didn’t have better future. Sally believed what her mother told her about their origin. Her mother told her that they were white people.

They belong to the white society. Infact, it was a lie. They had Aboriginal origin. She came to know about her origin when her grandmother told her everything about their identity and origin. She was shocked to hear it. Sally tried to know more about her identity but her mother didn’t tell her anything. She started to read books when her exam approached. She wanted to make her mother happy by studying hard. She did well. She passed all her subjects scoring distinction number.

The essay presents the theme of loss of culture and identity. The writer Sally Morgan is concerned about the cultural loss. She loses her Aboriginal identity and culture.  She belongs to an Aboriginal writer and community but she is living as a white. Her mother hides her real identity to survive in the white community. As a result, they lose their identity. She is not happy with the loss. She wants to continue her Aboriginal lineage.